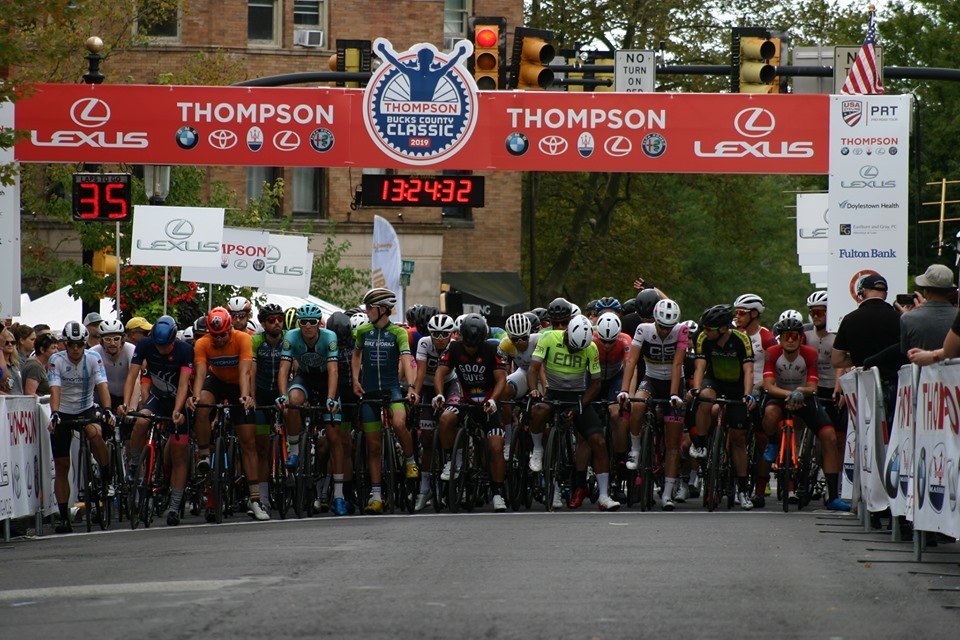 In 2010 I stood on the corner of Main St. and Court St. in my adopted hometown of Doylestown Borough with my business partner Fran Taloricco watching the Bucks County Classic imagining if someday we could own a bike store in our adopted hometown. In 2019, I stood at the corner of Court St. and State Street and watched one of America's eleven Domestic Elite/Pro Road Tour Teams race that same race in a jersey that includes our bike shop's name. 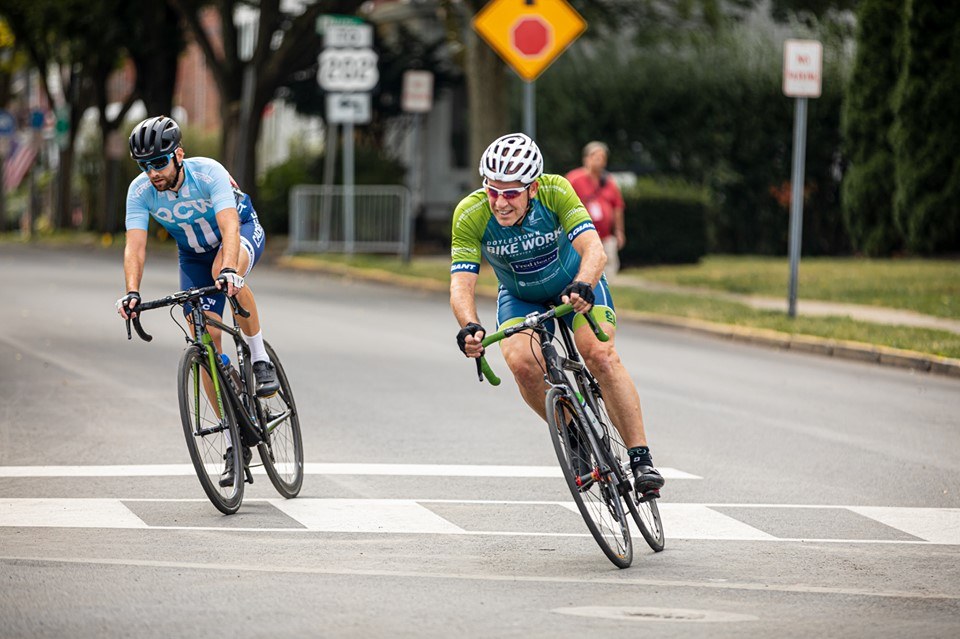 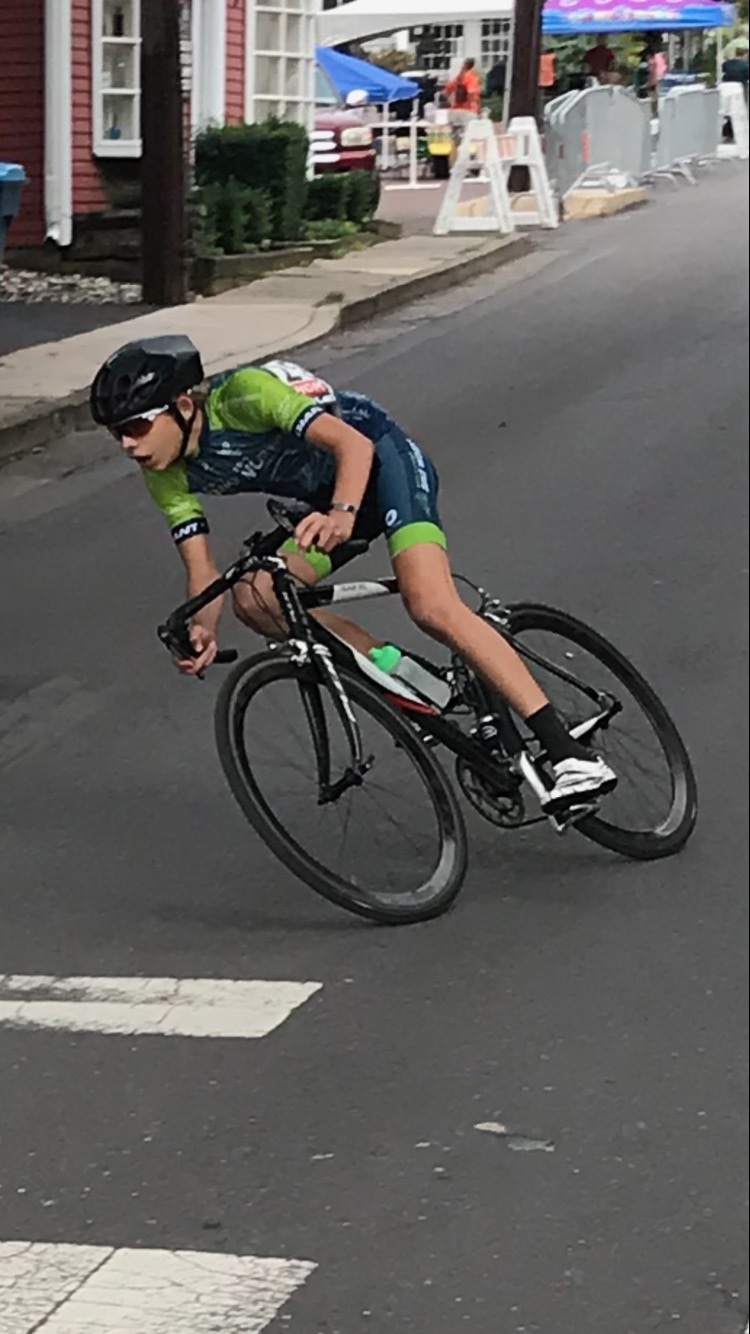 Sunday morning started with the Men's Amateur Category 3/4 Criterium featuring 55 year old Mike Bowe (Doylestown), Pete Smith (Doylestown), and 14 year old Alden Weinhold (Doylestown). Mike has been the stalwart of our town's cycling scene for many years and has been the captain of our amateur squad since its inception. You might recognize Alden as one of the young men working some hours in our shop when he isn't attending Lenape Middle School or racing at the Velodrome in Trexlertown. Mike survived the race to finish 35th. Pete probably pulled out somewhere near his house on Ashland Street to get ready to see his son Sam in the men's elite race (more about that below). Alden crashed half-way through the race and had to withdraw. He has spent the rest of the week impressing us with his bandages. Proud to have you guys represent us in the hometown race! 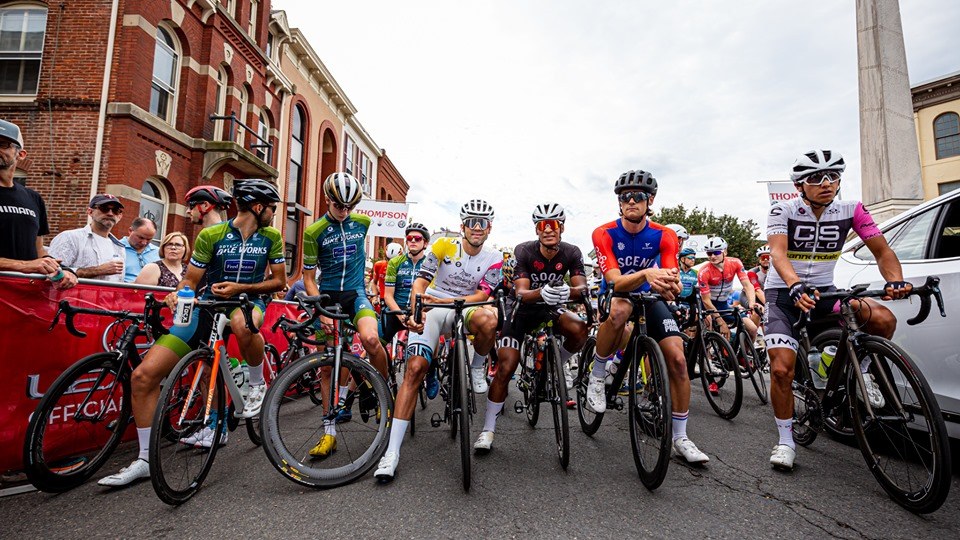 One of the biggest honors a racer can receive is to be "called up" and introduced to the crowd at the start of the race. Three of our elite athletes: Sam Smith (Doylestown), Chris Baccash (Doylestown), and Chris Meacham (Doylestown) were granted this honor racing in their hometown. Our other contestants in the men's pro race were Andy Dudle (Emmaus), Jason Wood (Lansdale), Colin Kelly (Ottsville), Gui Nelessen (Lambertville, NJ), Wes Kline (Emmaus) and Randal Henderson (Doylestown). 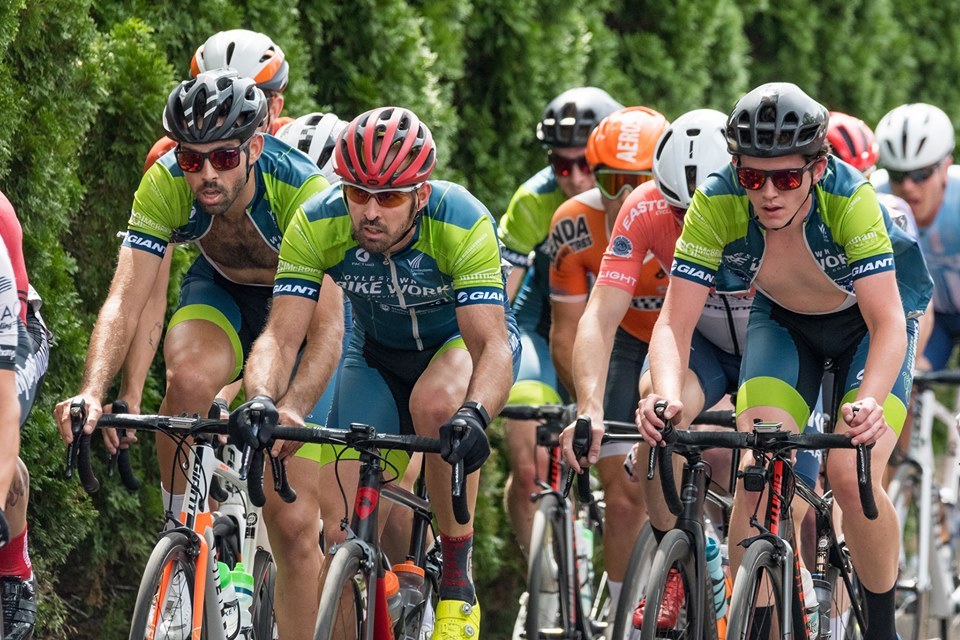 The Thompson Bucks County Classic Pro Criterium is a battle of attrition. The 1.5 km circuit has wicked, technical turns and 100 feet of vertical elevation on each of the 35 laps. A generous purse means that there is a deep field of some of America's best bicycle racers. For a relatively new, regional team of local racers like ours -- success can be measure by mere survival to the finish line. In the cold rain of 2018 we were only successful in getting Colin Kelly from the start line to the finish line. In 2019, we were successful in getting five of our team through the finish and several of our racers were agitators in the action of the race. Our top finisher was Gui Nelessen in 22nd, in a race won by Tanner Ward of Little Rock, Arkansas. You can see the full results here. 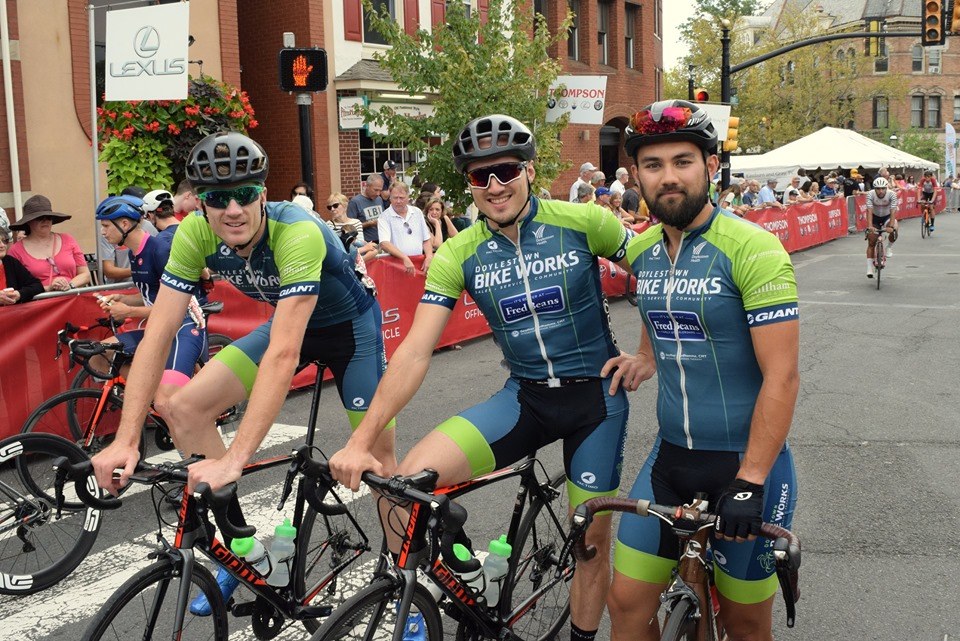 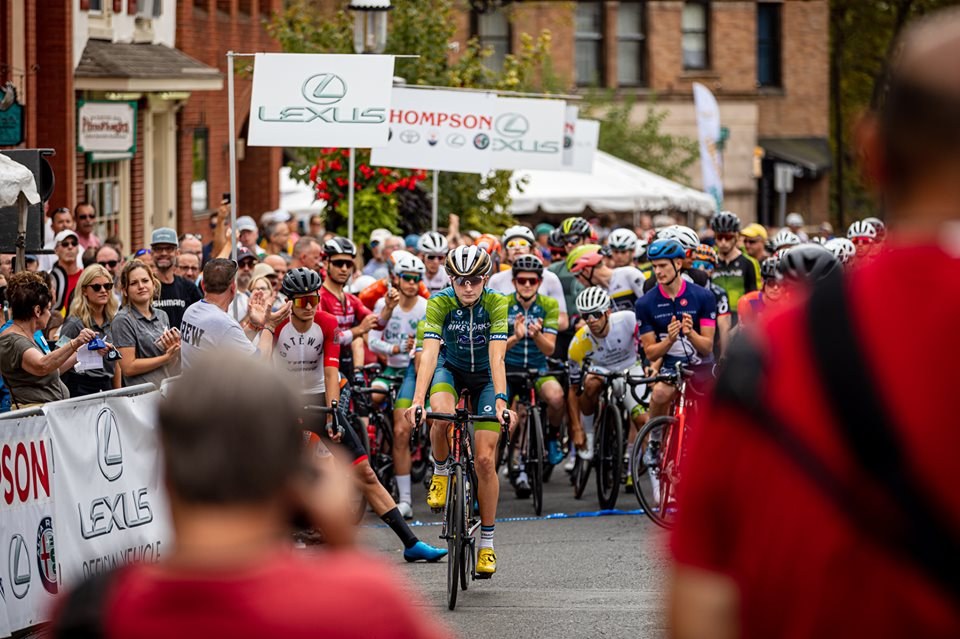 One very special story that needs to be told: Sam Smith (Doylestown), a student at CB West High School, raced past his house on Ashland Street 35 times on the way to a 39th place finish in his first Pro 1/2 race in his own hometown. Sam was an instigator at the race, frequently observed at the front of the field. No one's name was heard more often around the course than the cheering for Sam. Sam had an amazing season, earning his Category 2 license and making two international starts. It's safe to say that we're all going to be hearing big things from Sam in the future. 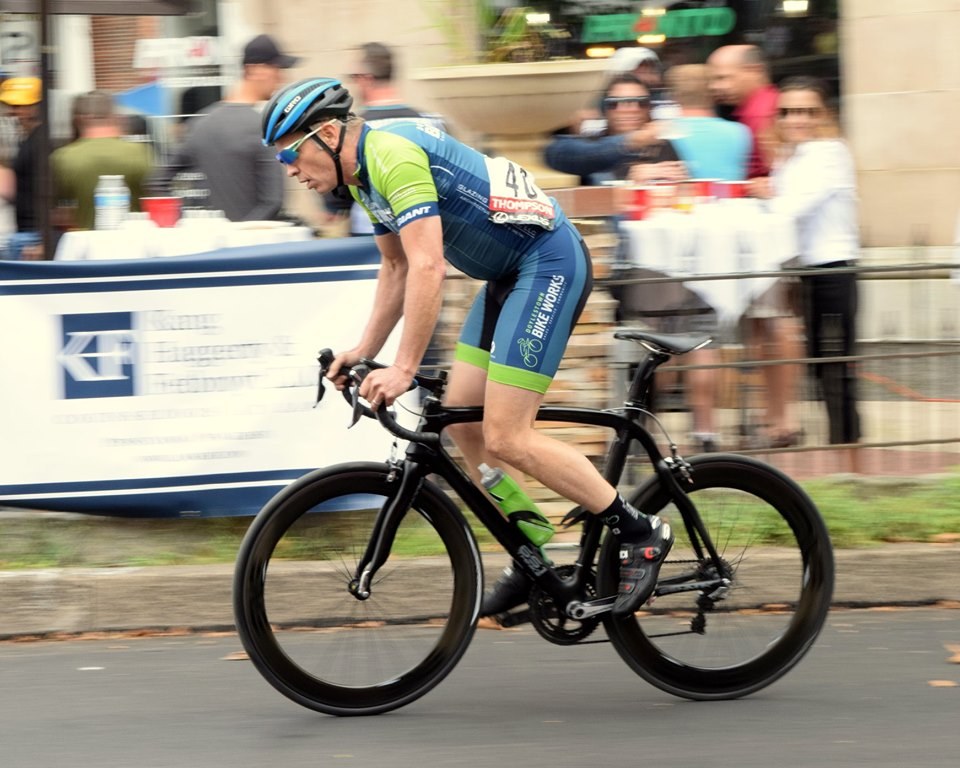 Another special story is Randal Henderson (Doylestown) who has been a fixture in our cycling community for many years. Randal earned a start at 49 years old surviving several laps of one of America's most aggressive races which is a goal he set in the beginning of the cycling season. Chapeau, Randal!

The loudest part of the course was right here at West Court St. and Clinton Ave. In the past 7 years we've turned the big turn going up to the Start/Finish Line into the best place to watch the race. Thank you to our community including our friends from the Central Bucks Bicycle Club, Team Ox, Floyd's of Leadville, the Wheelmen, and Philly Bike Expo for joining us. Oh, did I mention our teams sponsors, family members and shop customers who came and got loud with us?