Its Friday afternoon, some 750 miles south of Doylestown in friendly and scenic Demorest, Georgia on June 11th. Alden Weinhold rolls to the line of the Category 4/5 field with 40 other competitors for the start of the three day, four stage Tour of North Georgia (TONGA 1) Omnium Race.

The .8 mile criterium race around Demorest Elementary provided a dynamic start to a weekend of racing. Start line to 75 meters straight, 90 degree left to a 150 meter climb, 90 degree left to winding descent to back half of course, fast drop at 250 meters, sweeping/fast left turn with momentum to start a 70 meter climb to finish on top…..nice course. Alden started strong and continued leading or top 7 throughout race. Other than one, single rider break that held for 2 laps, the field stayed together with weaker riders falling off the pack. Four primes in the race: three for Omnium points and one for $10. Alden pushed hard for first Prime, but the rider on the break was still away, so second. Field was together for second Prime, Alden slightly misjudged the line and finished first under the banner, but the time mat was 5 feet before, so second. Third sprint, not to be denied, third time was a charm. And despite the banter in the pack about not going for a $10 Prime with two laps to go, Alden was jumpy and wanted the $10—success. Rolling through Start/Finish on bell lap, Alden was in top 5. With the left turn to the climb, Alden got boxed in toward the top and two astute riders jumped off the front. Alden found his way out and chased. The two got 4 seconds gap which Alden worked to close on the back stretch. With 200 meters to go, the fast left hander and climb remained, Alden had cut the gap in half. He closed very strong up the hill putting more distance from those behind him. One second off of first and a fraction from the second step finisher, Alden claimed his first podium finish in a big race! He was really happy to have a step up as the awards were announced; however, he is certainly hungry for the next stages of the race. It is possible that Alden leads or is second in Omnium points after the criterium race with 31 points for 3rd in race, 5 Prime points for a first and 6 points for his two, second place sprints. A great day. A big thank you to bicycle racing fanatic, cycling commentator, and older sister, Emmerson Weinhold. 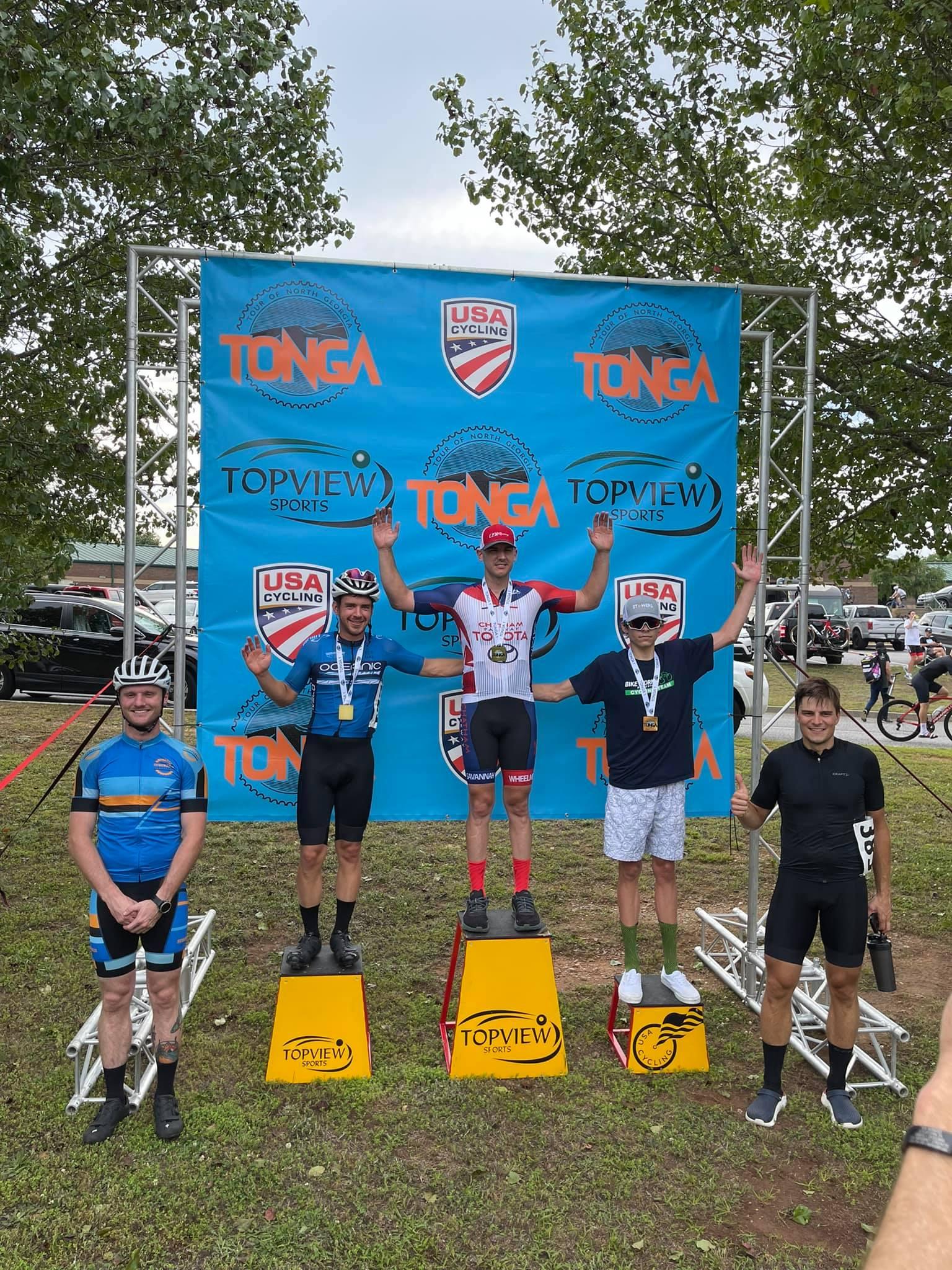 Day 2 brings a 42 mile, 5 lap road race for the riders AND an 8 mile individual time trial race. The road course is a tour through scenic Lula, Georgia with beautiful roads, three tight turns, and a two pitch 250 foot climb in last 1.2 mile climb to the finish. The time trial is an out-and-back course. One might think that it would be a leisurely morning with an 11:50 am start, such was not the case for Team Weinhold. Alden was dropped off at the start at 10:15 of the course, and then it got real for Emmerson and the driver (me). We left the lot about 10:30 after getting Alden settled and Emmerson located the only shop carrying Salted Carmel Gu. At 35 mins in each direction, unknown Gainesville traffic, and the need to reach him on the start line………this was our race of the day. Co-pilot Emmerson provided expert directions and did not comment on the speedometer, improper lane changes, and the myriad of moving violations that took place to afford Alden the opportunity to race with his preferred flavor. This will not happen again.

Now on to the 5 loops of fun in the smaller mountains. With newly minted confidence from his third place finish the night before and learning that he was leading the General Classification (overall lead in the Omnium or stage race), Alden came to the line. With a mid-day start, the heat, humidity, and sun were all reflecting Georgia’s Summer. The Start/Finish line on the second lap served as the KOM for the race. The field stayed together for the first two laps and started ramping up in the last 250 meters of the climb to the line. One rider darted out to the left and Alden chased. The police car slowed and became an impediment, the lead rider heading to the left of the car over the yellow line, while Alden stayed right. The lefty leader beat Alden to the line; however, he was initially pulled from the race by the official for going around to the left. After a significant tongue lashing, the official let him return to racing as he worked to catch the group. Alden scored three more points for his efforts. The field regrouped and stayed together through the remaining three loops. Alden was able to grab an ice-cold bottle in the feed zone on lap 4 from Emmerson for some much-needed relief. As the field cranked hard up the hill on the final climb, Alden worked hard to cover the moves just before the hard right into the final 20 meters. Noah Smith slipped ahead, and Alden finished a step up from Friday night, Second Place! As Alden stood on the second step and the other racers assumed their respective positions, Emmerson was given the opportunity to present medals to all those who placed, including her brother.

Following his finish and a quick warm down, we dashed back to the hotel to restore the core body temperature before his time trial start in 90 minutes. Now…onto the drop and go event, pedal as fast as you can consistently four miles out, then a 180 turn and pedal back to the start four miles away. Interestingly, all those riders using TT bikes, helmets received a 30 second deduction for their time. Alden headed out at 4:08:30 for his time on the course working hard immediately to make up the 30 second gap on the rider in front of him. Five minutes into the course, the rain started as the ominous dark clouds rolled in. At first a drizzle and then full downpour and lightening. As I stood on the course, on of the old guys flew by me on his $12,000 TT bike yelling, “And we do this for fun!” Alden finished in the downpour with a high level of frustration and disappointment, “I usually get more dialed-in, in these conditions. I did not feel it today.” Fast forward 15 minutes of pouring rain where every part of everything is soaked, Emmerson nearly floated across the parking lot from the judges trailer……….”He got Second!” Wow, two 2nd places today and he extended his General Classification (or GC) Lead. Alden has amassed 117 points with his closest competitors at 90 and 80. Time for some rest this evening before a very challenging mountain road race tomorrow.

Sunday the 13th brings a 41 mile Mountain Road Race in the scenic mountain town of Clarksville, GA.. With two 20-mile loops, each promising 2000 feet of vertical climbing, it will be a dynamic day on the bike for all riders.

As 40 riders prepared for the double loop stroll through the mountains, the officials delayed their start by 12 minutes to accommodate those finishing from the early morning races. At 12:07 in prime hot Georgia sun, the riders were off with an immediate attack from the line. An ambitious young rider quickly put time on the field, holding his lead for the first six miles as the rolling course edged toward the big climb. As the group eased up on the rider, a counter by another solo rider ensued. The field did not respond over the first time up the big climb and held together on the descent. Around mile 13 with some confusion in the field, the lead rider was swallowed and a group of three snuck away on a break working together to set up for the sprint points at the Start/Finish line of lap one. With a 45 second gap, they consumed all the sprint points. Alden led the field across the line with a particularly disgusted look as it was the first time all weekend, he was not in contention for bonus points. As the sun beat down and the humidity climbed to 99%, the field worked to bring back the leaders. Over the next 8 miles up, up, up to the King of the Mountain (KOM) competition, the leader pushed hard fracturing his pack of three, much too strong for the other two riders. Ultimately Chad Crummel proved too strong for the field easily taking the KOM with a 90 second gap, followed by a second rider that had 15 seconds on the field. As the field approached the KOM sprint banner, Alden jumped from the saddle in a sprinting dual with Luke Vaughn, just nipping him for third in the KOM. Excitedly Emmerson peered over the official’s shoulder to watch the replay on his camera several times. After assurance of Alden’s point, Emmerson and I jumped back in the car to grab one more view on the back side of the course curious to see how the race evolved through the descent. We pulled over on the road and within 15 seconds the field motored past with Alden and Luke Vaugh having pulled in the dangling 2nd place rider. Chad continued to push ahead ultimately finishing solo nearly 5 mins ahead of the field. As the finish line approached 3kms out, the pace increased, and positioning took precedence up front. Alden got caught on the inside in a gradual turn and was in 7th with 1000 meters out. With riders throwing their last vestiges of strength from the grueling weekend, a group of 10 lunged forward as the line approached. Luke Vaughn, a friendly rival from the weekend, grabbed second with a bike length. Alden made a late surge to secure the last step on the podium.

The Tour of North Georgia was a great weekend for many riders from across the US, including Gran Tour Rider Nate Brown and the electric Hot Tubes team. For Alden Weinhold this was THE breakout weekend for his cycling career. Alden amassed two 3rd place finishes, two 2nd place finishes, 17 Sprint/KOM points (closest competitor had 6), and won the Omnium with 149 points, 24 points ahead of second…..and now wears the Champion jersey from TONGA. Alden has greatly benefited from the group rides in Doylestown, the numerous mentoring opportunities from tenured riders/sponsors, Elliston Coaching, and the exceptional support from the Doylestown Bikeworks p/b Fred Beans Team. Thank you to all who have supported Alden and a special thank you to Emmerson Weinhold for all her incredible support throughout the weekend for Team Weinhold racing. Final Results for TONGA 1 Here! 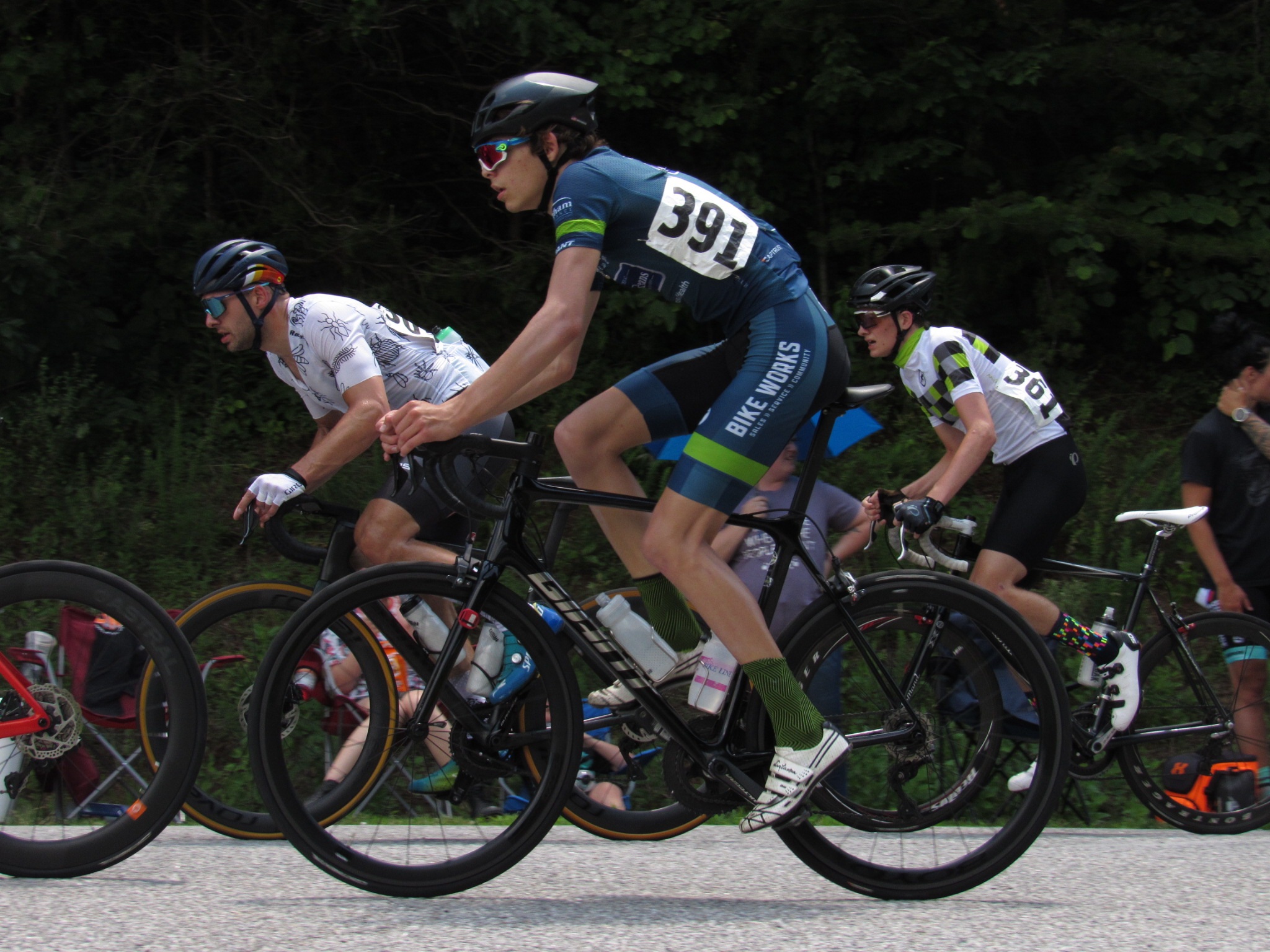 Alden in action at TONGA 1