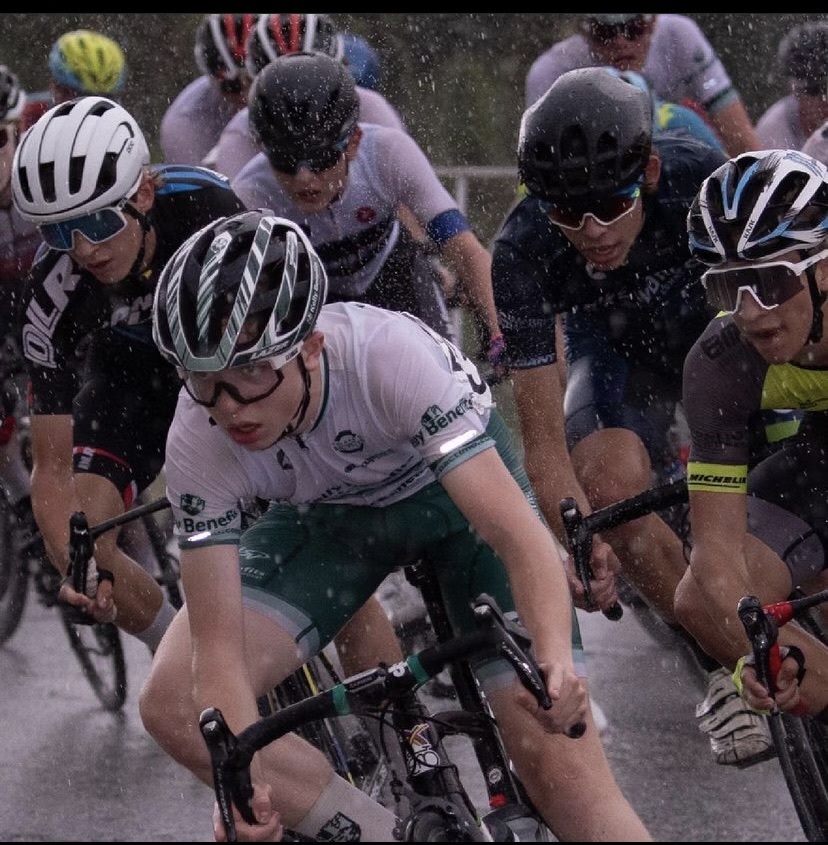 Sunny skies for the last day of racing at US Amateur Nationals in Fleming Island, Florida. As we arrived, so great to see Noah Shumskas racing in the DBW p/b Fred Beans kit. The closed Criterium course is .7 mile loop around an office park on a flat very fast course. East breeze of 10 mph did little moderate the 88 degree sunny day with a real feel of 95 degrees.

As riders staged, most of them stuffing ice bags/stockings down their jersey to get ready for 45 mins of non-stop hammering. Once again the announcer “called up” over 50 names at the start, unfortunately Alden was on the losing end this time for some reason and was one of the last 15 names called forcing him to the back.

Off with the whistle and Alden began to work his way up into contention. Turn one was 90 degrees over pavers, followed by a 90 degree right turn on to a stretch that included a chicane forcing great positioning, followed by a sweeping right turn and final turn was fast 90 degrees <150 meters out. Exiting every turn warranted hard sprints to keep pace with the peloton, most out of the saddle, very few were seated. Mid-race, during one of the surges in the chicane Alden was forced “to claim his space” to prevent from being thrown into the barrier by one of many aggressive riders navigated the course. For the next 20 mins Alden worked hard, really hard to move up. Fighting multiple breaks that were brought back, the pace remained intense for all but laps 12-10 to go where the group sat up all together.

Just after 10 to go, the attacks became relentless multiple times a lap. A single contender was unable to stay away. Both Hot Tubes and Kelly Benefits worked diligently to position their riders for a strong finish but specifically for a sprint to result in top step billing. Alden stayed well positioned laps 10-4 to go but found himself farther back than he would have hoped entering lap 3. Having already raced the fastest and most aggressive race in his career, Alden realized the urgency to move up with time running out. He worked aggressively on the inside of turns, accelerating on the straights, and creating gaps that were barely present allowed him to position in the top 20 when beginning the bell lap. The speed of the last lap was incredible with many riders desperate to gain top 5 heading into the final turn. Alden accelerated and gained several more more positions and headed into the final turn. Just in front of Alden in the final turn, two riders had wheel contact in the apex of the turn. The contact forced three riders into an intimate relationship with the asphalt. Alden jumped, accelerating continuously through the finish line passing another three riders in the final stretch to notch 9th place in the US Amateur Nationals 15-16 Criterium.

The race was the culminating event for the past 6 weeks of cycling for Alden. Initially his exposure to real racing began in Tazwell, VA through Chasing the Wild Board. With a 5th place Criterium finish to end that weekend, his confidence started to grow. Two weeks later at The Tour of North Georgia, his confidence received several more deposits with two 3rd Place and two 2nd Place individual race finishes; earning him the Omnium Champions jersey. He was then able to watch teammates Andy Dudle, Colin Fitzgerald, and alumni Sam Smith compete in the US Pro Nationals in Knoxville, TN. Each successive step of this journey has been possible through the support of Doylestown Bike Works, great sponsors, dynamic coaching, friends/family, and hard work which has resulted in success nationally far sooner than expected. Thank you to everyone who has watched and supported these early stages in Alden’s cycling pursuits.

Videos of Alden's start and finish at the 2021 USA Cycling 14-15 National Criterium Championship.

Talk of the T-Town: Chris Meacham