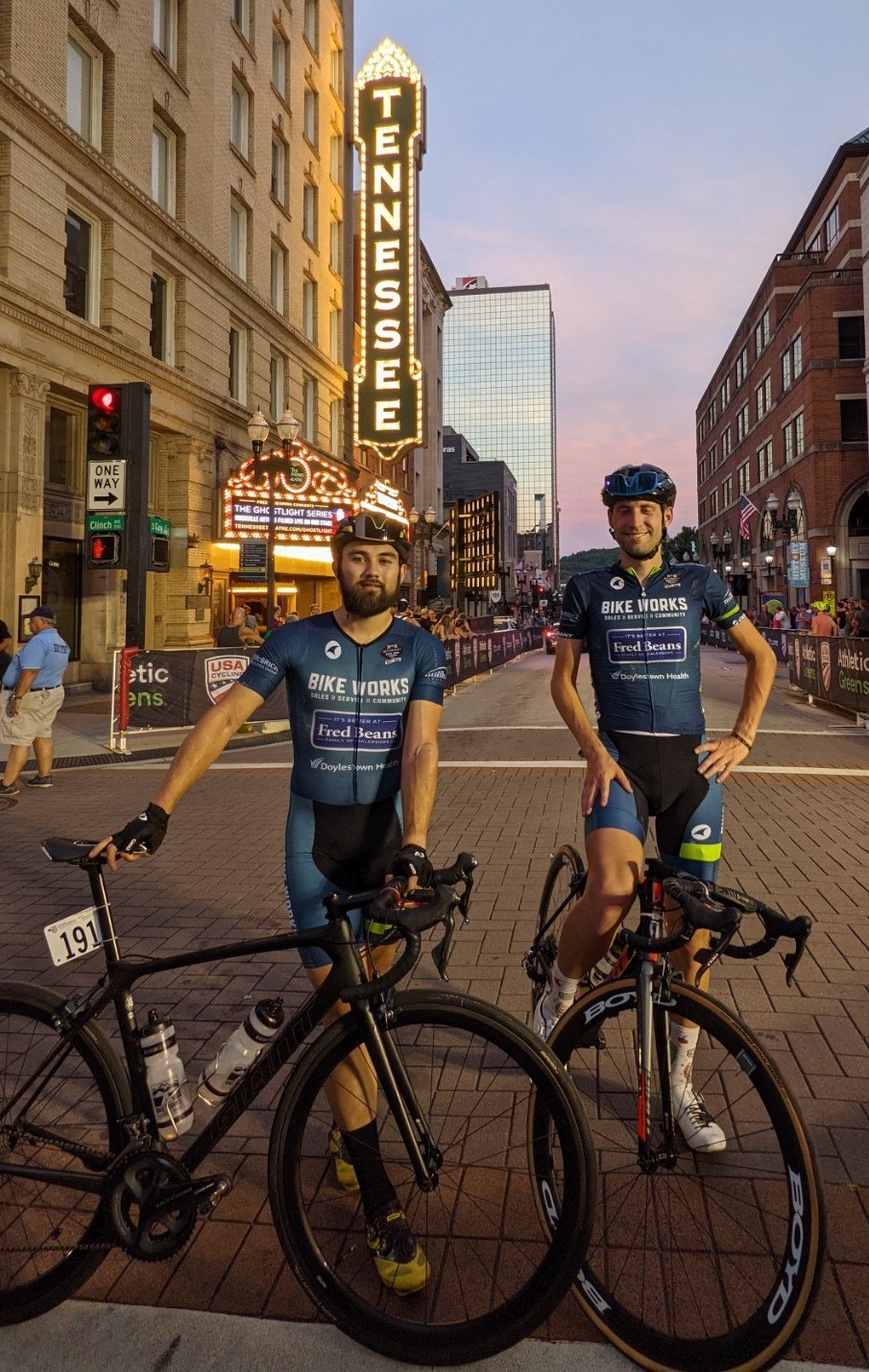 Andy and Colin on Gay Street in Knoxville, TN after Friday's criteirum race.

Arguably, there is no bicycle race in America with greater importance than the United States Pro Road, Time Trial and Criterium Championships which were held this past weekend in Knoxville, TN and hosted by our sport's Olympic governing body USA Cycling. There are ten professional cycling teams in the United States who compete in this event each year for the right to have one of their riders wear the Stars & Stripes jersey as American champion in these disciplines. This year, the invitation was expanded to America's twenty Domestic Elite Teams (DET) of which we are one. Our racers must possess Category 1 racing licenses like the professionals, but are not paid salaries. Some of our racers aspire to reach the pros, have been on pro rosters but have left those ranks, or are your neighbors who work Monday through Friday and race their bikes at a high level of competition on the weekends. In a baseball analogy, we are similar to a minor league baseball team. Last week, two of our riders Andy Dudle (Emmaus) and Colin Fitzgerald (Orefield) decided to see where they stood against the major leagues in the criterium and road racing disciplines. 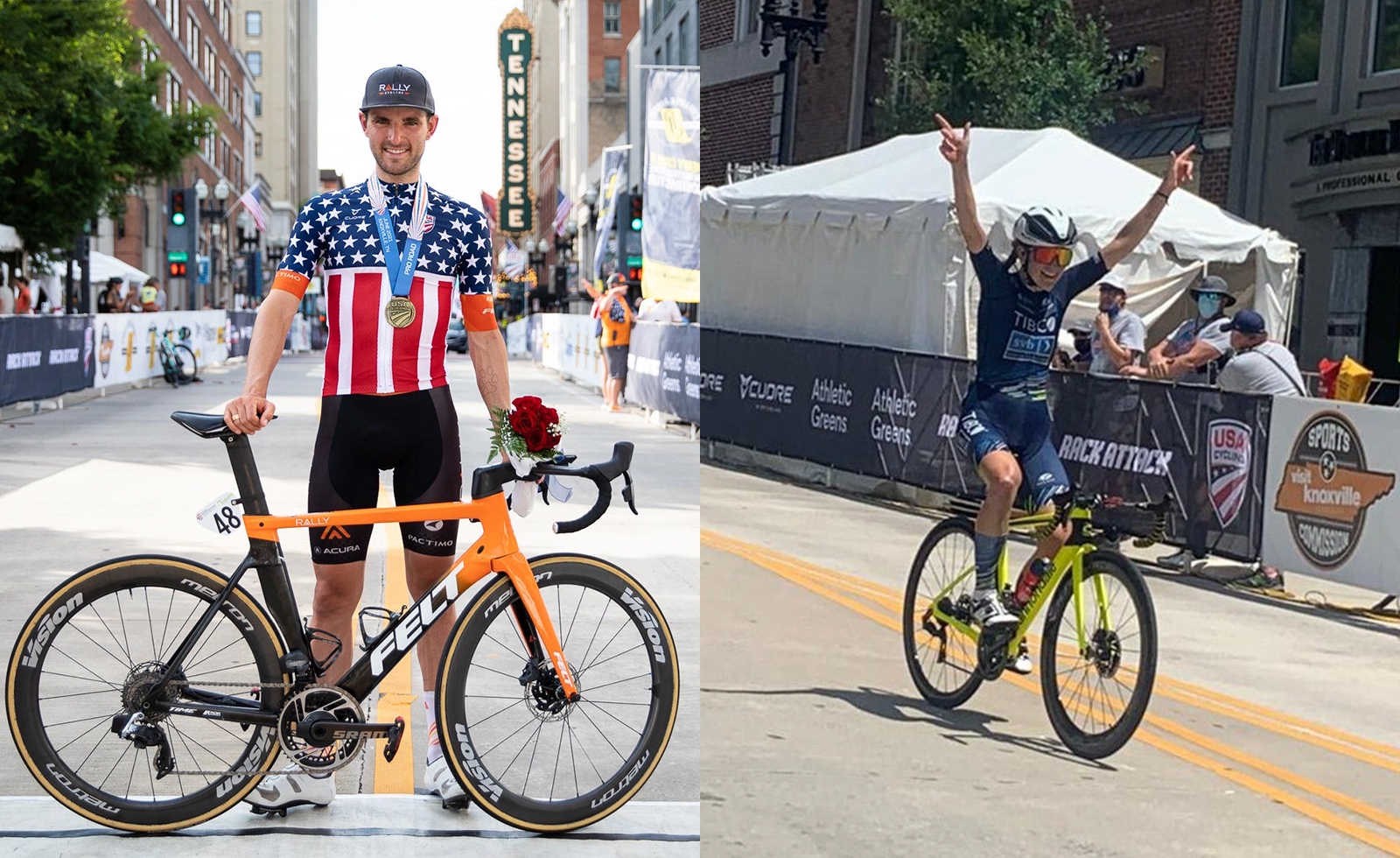 Friday night's 80-minute, criterium race in downtown Knoxville featured a 6 turn course, featuring two small, but punchy hills (7% and 9% gradient). The object is simply to be the first across the finish line on Gay Street. While casual fans often associate bicycle racing with road-racing, stage races like the Tour de France, American bicycle racing is characterized by close-quarters, closed circuit, criterium races like we see each fall in Doylestown. L39ion of Los Angeles led by Cory Williams and former Bucks County Classic winner Ty Magner was favored to get their rider to the line first, but a huge crash in the final lap eliminated many favorites. Luke Lamperti of Trinity Racing won the race, but we are ecstatic to say that Colin (36th) and Andy (70th) got through the finish line with the group in a race in which about 25% of the 113 man field was unable to complete. "It felt great" said Andy, "With four laps to go I knew I would finish and felt a huge sigh of relief." Full results here. 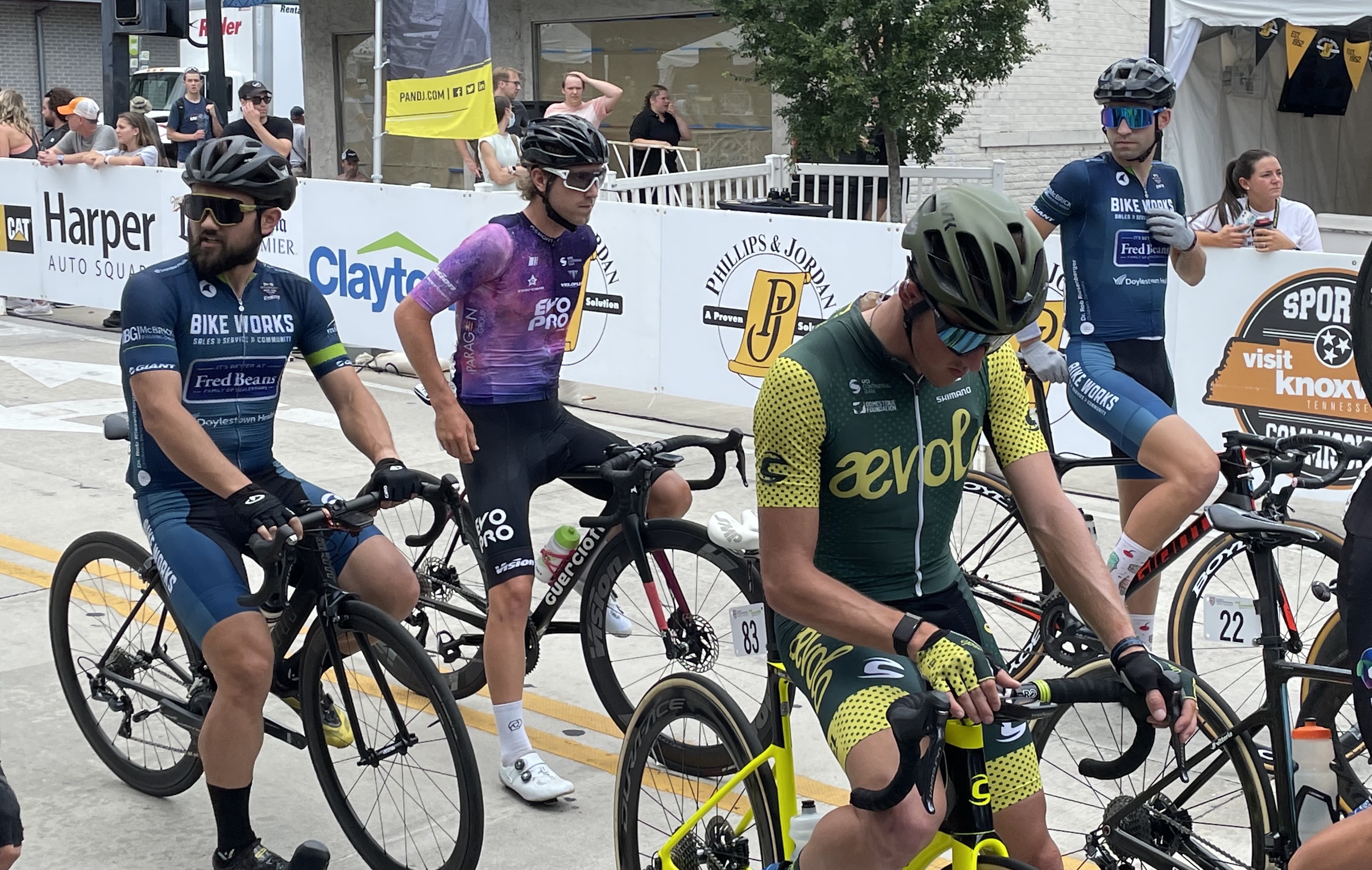 Andy Dudle (L) and Colin Fitzgerald (R) prior to the US Pro Road Racing Nat'l Championship. Photo: B. Weinhold

After a rest day, Andy and Colin lined-up for 117 mile road-race championship which featured 15 laps of a 9 mile course that includes the half-mile, 10% gradient Sherrod Road climb on each lap. In order to place in the race, a contestant has to survive eight laps of the race which Colin was able to do finishing 78th (at about 2.5 hours) out of a field of 140+ riders. Kudos to Andy, our team's sprinter for taking the line for a grueling 4+ hour race won by Joey Rosskopf of Rally Cycling and featuring firepower like defending US champion Alex Howes (EF Foundation), Tejay Van Garderen (EF Foundation) and Ben King (Rally Cycling). Colin said "It was an awesome experience to line up against Tejay Van Garderen, an icon of American cycling throughout the 2010s, in the final race of his 12 year Pro career"

Full results here. Andy and Colin, we are so proud of you. 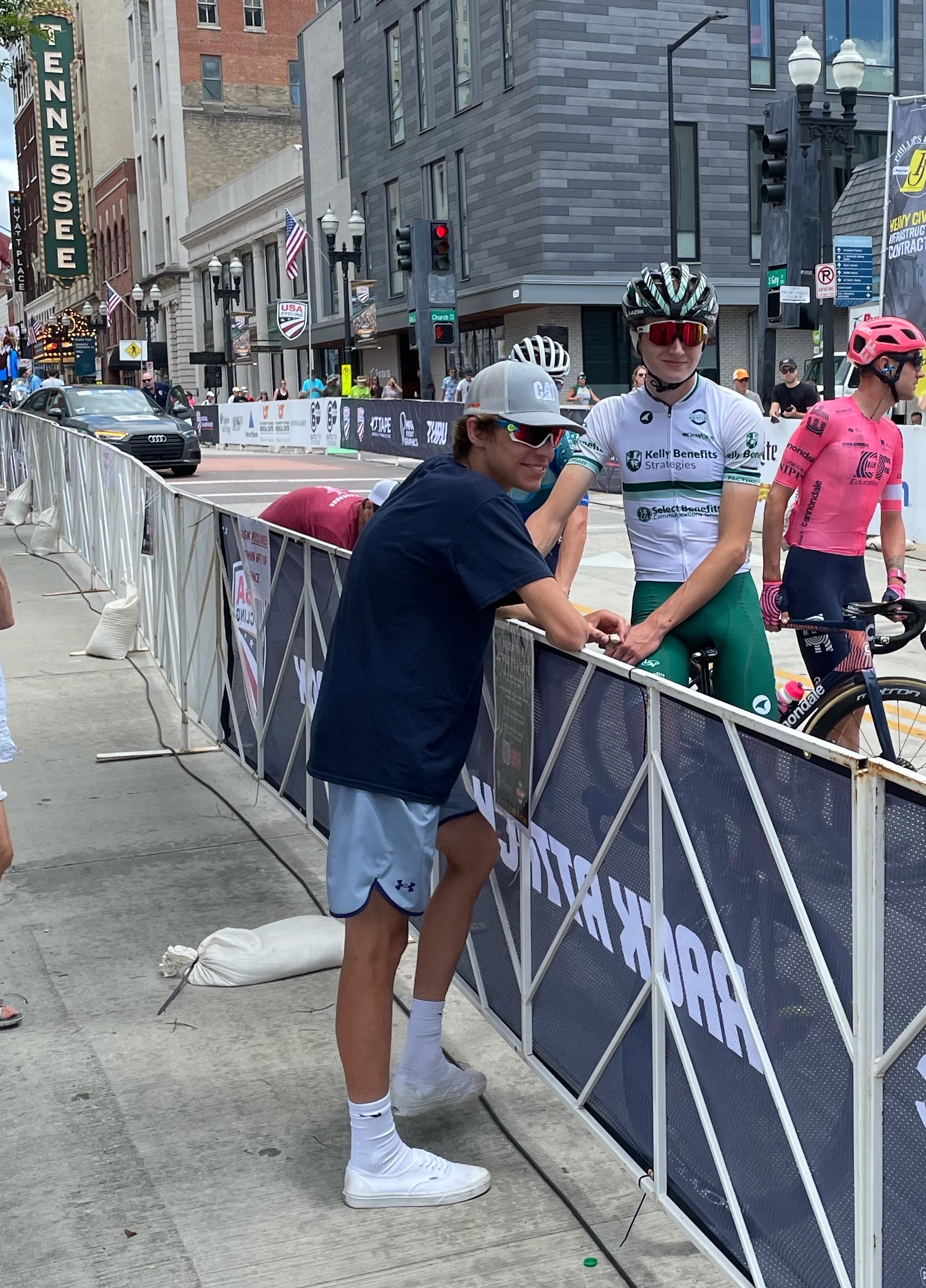 A few others to note: Team alumni Sam Smith (Doylestown) racing for the Kelly Benefits Strategy Developmental Team finished 40th in the criterium and 80th in the road race, while Warrington native Bethany Matsick (Liberty University) finished 42nd in the Women's road race. Congrats to our Bucks County natives!