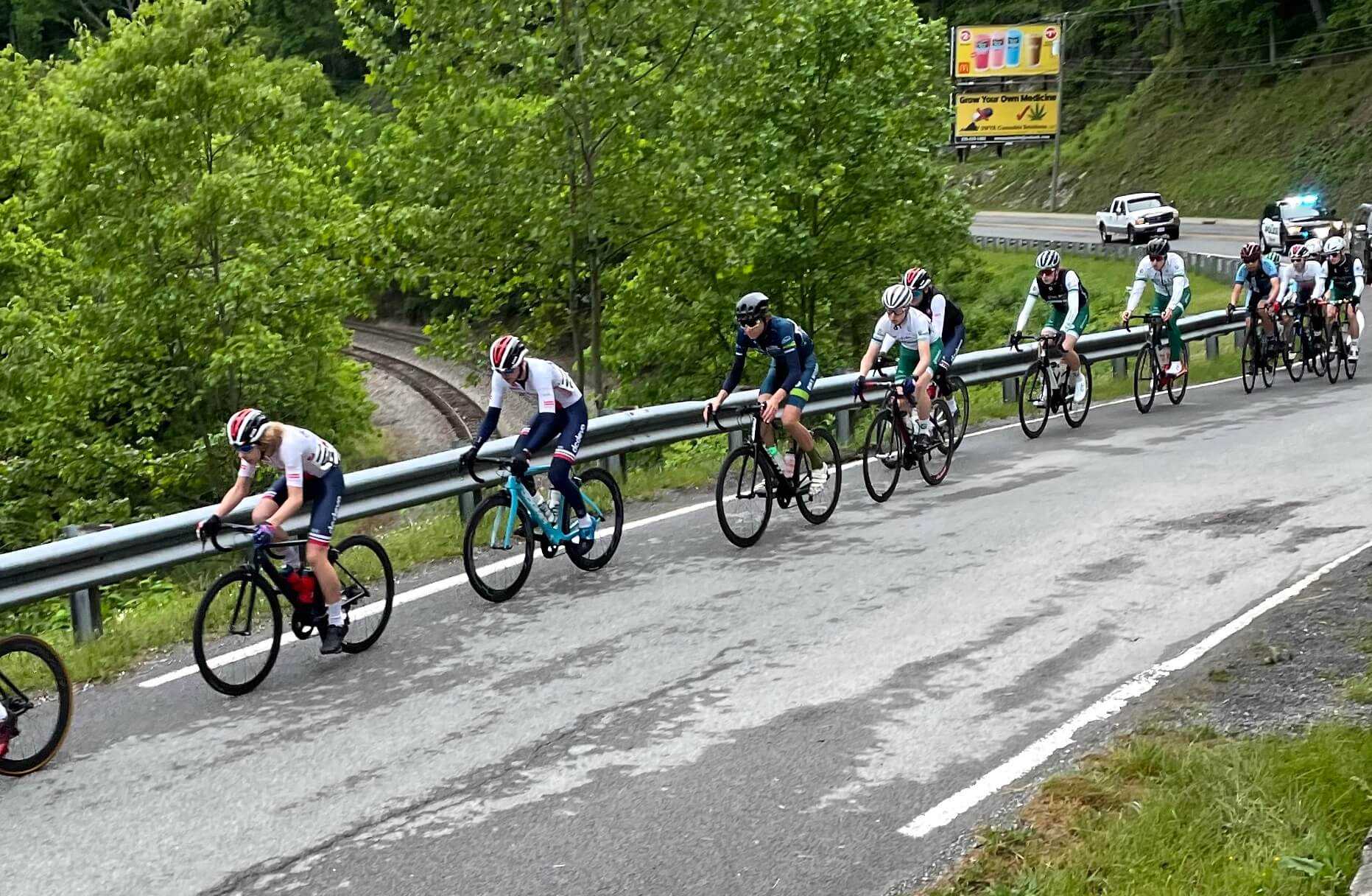 Chasing the Wild Boar is a three day stage race in the heart of the Appalachian Mountains, centered in Richlands, Virginia. It consists of an individual time trial, road race and criterium. Our rising junior racers Alden Weinhold (Doylestown) and Steve Szabo are participating in the junior road race (28 miles), junior criterium, and CAT 4/5 criterium races. We asked Bob Weinhold (dad) to journal the events:

"May 30th at 9:15 on a misty high 47 degree Sunday morning and the JR’s Road Race (28 miles) has just concluded. Bike Works p/b Fred Beans had two racers that finished in the top 10 on a very difficult course in a dynamically competitive field. When they crossed the line, Alden Weinhold finished 8th and Steven Szabo (Doylestown) 10th, but there is so much more to tell.

Arriving late afternoon on the 29th, Alden, Steven and old man Weinhold choose to ride the loop as recon and to shake the legs out after 10 hours in the car. Unfortunately on one of the very treacherous descents, one in our group proved that cycling is a full contact sport. Thankfully not to much damage, we continued to ride the loop and return to the car. As we passed through a State Trooper Road block, we were fortunate they did not look into the back seat to see a hoodie wearing teenager bleeding as the adult was feigning a smile in the front seat. Would have been an interesting explanation to the State Trooper looking for something to make his day. Returning to civilization and the closing urgent care, provided a bit of dermabond which made everything ok.

Now on to this morning, arriving at 6:15 am into a parking lot full of teams including DCdevo(8) and Kelly Benefits (5 or 6), and the proud representation of two Doylestown Bike Works p/b Fred Beans. Thank you to the sponsors and support back in 18901 and 18902.

The field of 20 started together and two had a small crash 5-7 miles in, group held for them to recover. 7.5 miles out to a loop that was done twice and then the return of 7.5 miles back. The mountain loop had very fast technical descent and switch back climbs exceeding 15%. The group held together on most of the first ascent and then two broke off following big climb. The group splintered and Alden fell just off the second group forcing 6 miles of solo effort to catch up. Steven also worked really hard with another couple of strong riders to catch the group. Two stayed away building a lead into a strong second loop, then group came together by the bottom of the second big climb.

For the last 10 miles, a group of 12 riders headed to the finish almost 4 mins behind the two leaders. Alden and Steven worked hard and positioned well for strong 8th and 10th place finishes. The sprint was technical coming into town, over railroad tracks, and two 90 turns with a 60 meter sprint finish.

Hats off to Alden and Steven really showing up on a very tough road course, racing against national caliber talent, and holding their own against two big teams!"
Robert A. Weinhold 5.30.21 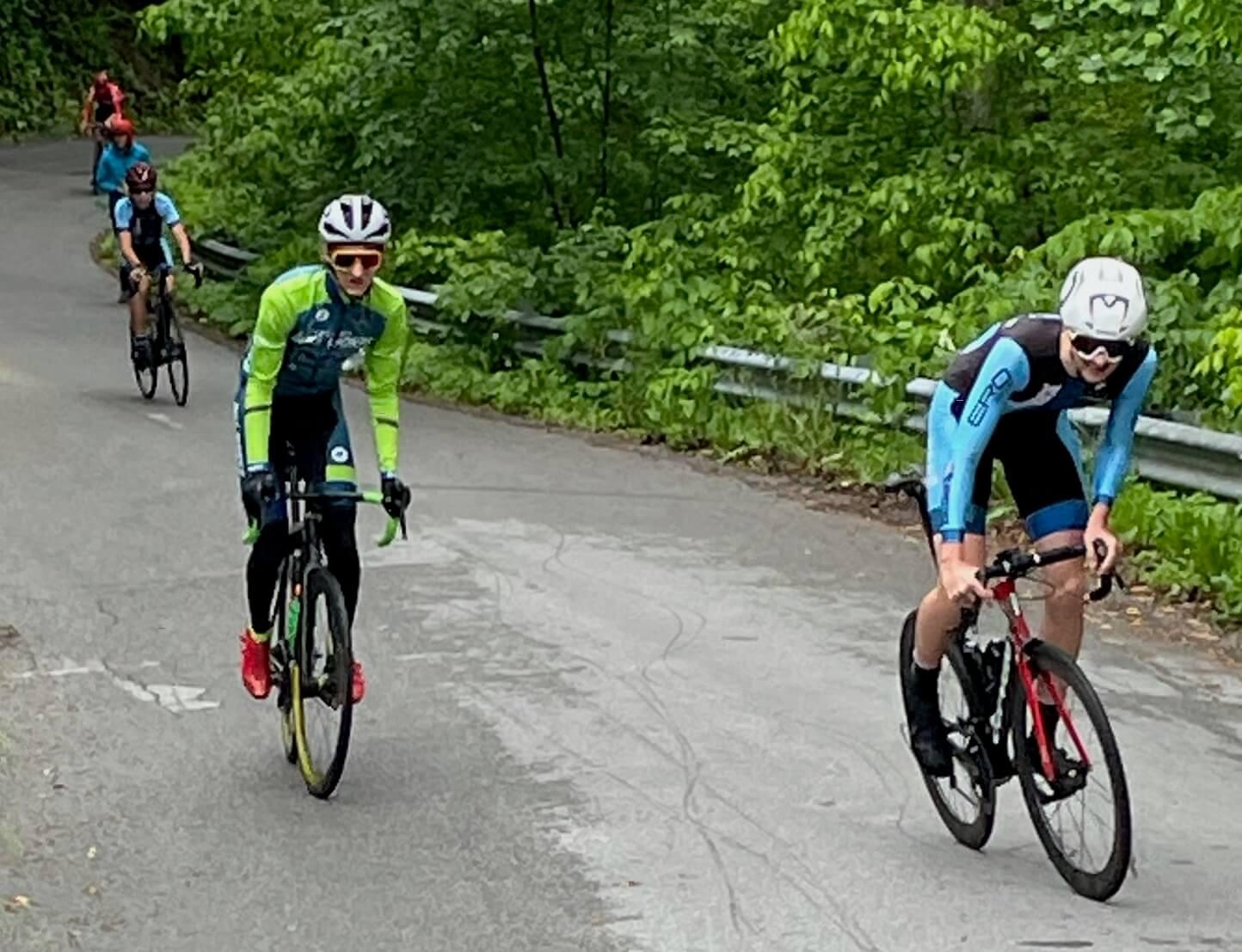 "The early hours of Monday morning involved the first time Race Director and Richlands town officials scurrying about to clear their course of cars for 5 different Criterium races. The Juniors under Age 18 Criterium race was due to start at 8:45 AM however several cars snuck into the course late and needed to be towed. As the Juniors lined up at 8:40 (after most appeared to execute a precision warm-up) the race was delayed until 9:10 AM for the 35-minute race.

Steve Szabo and Alden Weinhold joined the field of 18 other riders who had been busy shaking off the most challenging Junior road race of 2021. The previous days' effort of 44 miles with over 3000 feet of vertical climbing had several coaches calling the race the toughest any of the riders will see all year and now those guys had to garner the energy for a technical criterium race against a strong field of junior racers.

The 0.8 mile course had two 90 degree turns at the top and a 160 degree turn at the bottom of the course which spit the riders into a punchy steep climb before the 80 meter sprint to the finish. The race started on the third lap: Henry Neff of Kelly Benefit Strategies Cycling Team and Zac Olszewski of DCdevo Racing Academy broke away from the peloton never to be reeled in by the field. Their break left 17 other riders to tactically jockey for position throughout the race. Alden was eager to stay up front and cover any breaks or attempts at bridging; however, both large teams prevented attacks which made the day quite frustrating. Steve gave a valiant effort after the challenging previous two days of riding and he stayed connected and in contention throughout the race.

With 5 laps to go and the early break of Neff and Olszewski holding strong, the field began repeated attacks from multiple members on each team. Steven and Alden watched carefully working hard to cover every move made by the opposing teams, often wishing for a bit of coordination to split up the field. Alas, no one was able to get away as the bell lap began. The pace had ratcheted up several miles an hour and the top of the course became quite congested in the two 90 degree turns that dumped into the sweeping descent on the back of the course. The riders, some confident and others nervous, rapidly approached the near hairpin turn at the bottom of the course. Alden positioned well in the approach and on the inside, while Steven prepared for a fast smooth line through the turn. Just as Alden was in the middle of the turn one of the riders just outside of him dug a pedal but did not go down. As other riders were distracted, Alden jumped hard out of the saddle and up the climb leading the peloton. Alden crested the hill in the lead and cranked hard the remaining 70 meters. Steven carefully navigated the mayhem and pedaled strongly to the finish. As the camera snapped along the finish, Alden held strong for a 5th place finish battling two others that lead the field sprint and Steven came across in 13th.

Congratulations to Alden and Steven as they raced their first respective road races and a very challenging criterium the next day. Many of the riders in the field have raced 20+ races and will also be racing Jr Nationals later this month. Thank you to the great sponsors of the Bike Works p/b Fred Beans Cycling Team and most importantly thank you to all who served our country paying the ultimate sacrifice for our freedom." 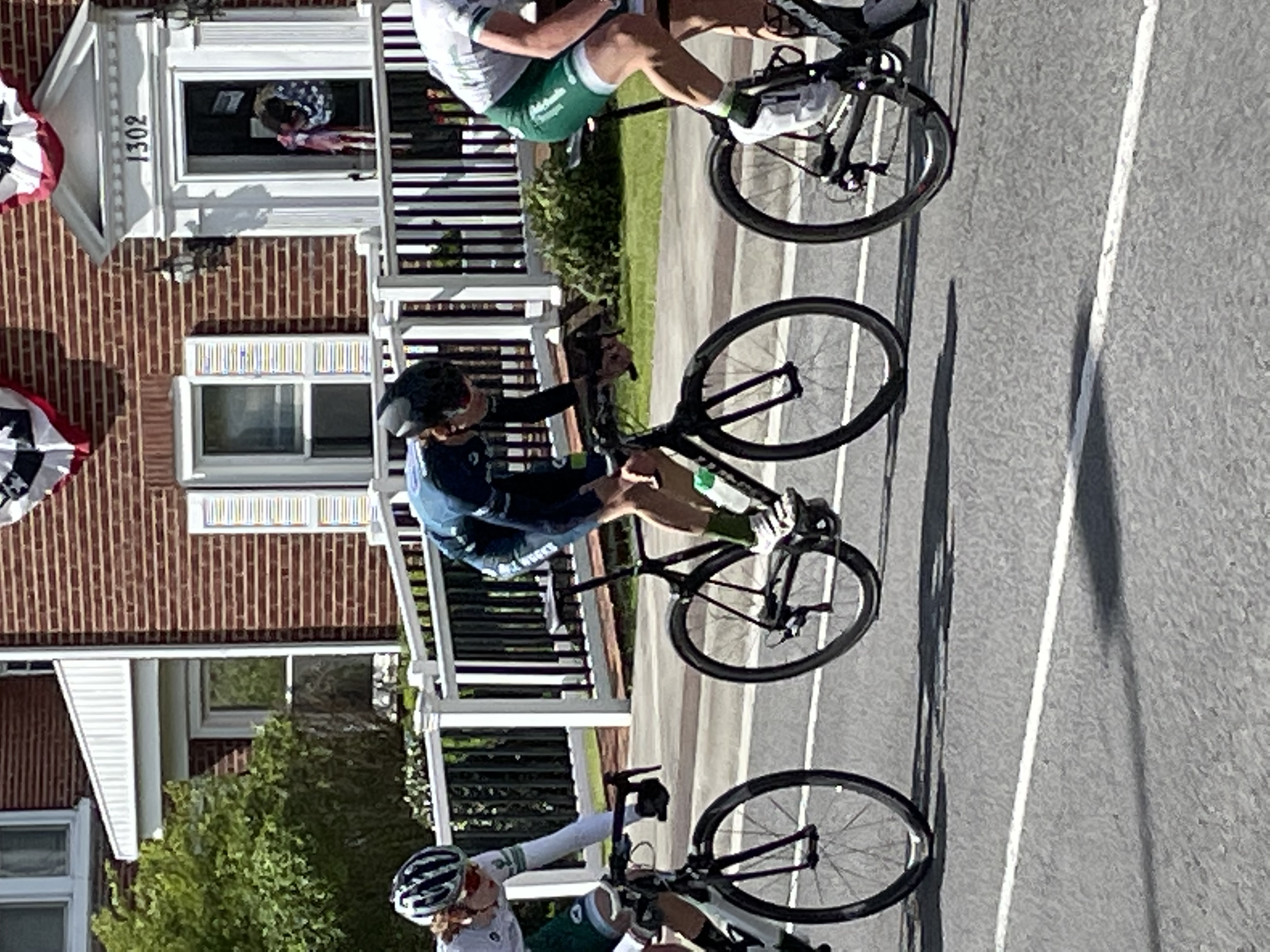 Alden Weinhold sprints to 5th at the Wild Boar Criterium 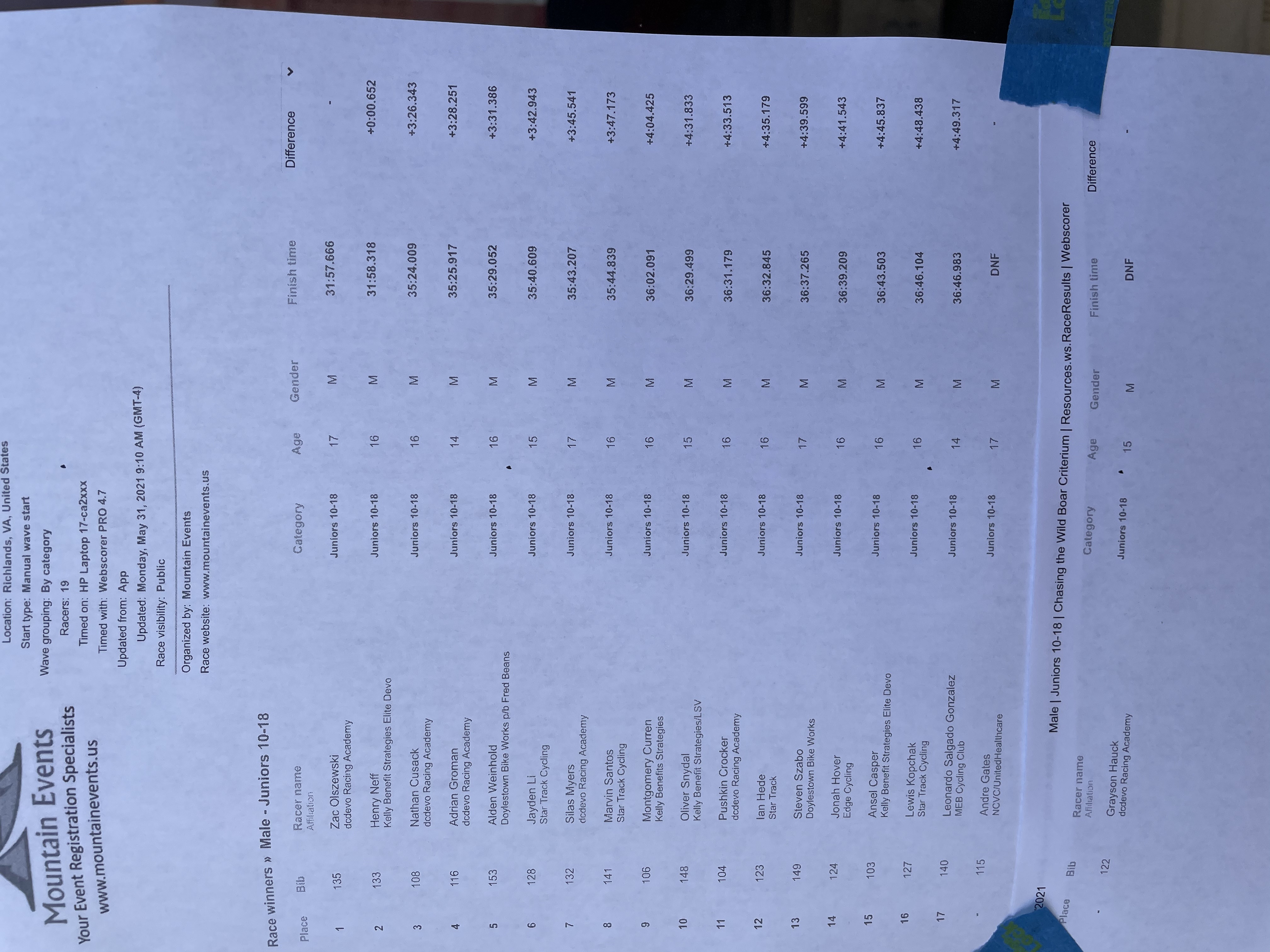 Talk of the T-Town: Chris Meacham