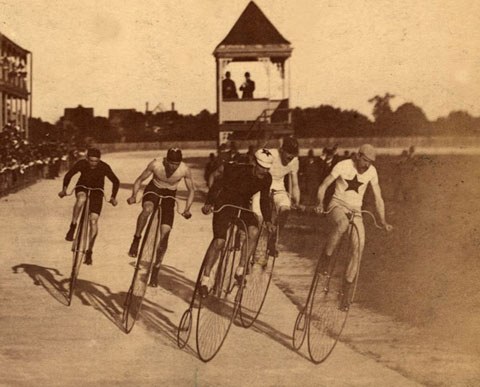 Bicycle Racing in the 1890s at Springfield, Massachusetts

For most of human history people were busy trying to stay alive. In the 1870s a new class of sporting men emerged that had enough leisure time to watch people walk around in a circle for six days to determine who could walk the furthest. Race walking gave way to bicycle racing which would remain a dominant sport in the United States through the turn of the last century. While the six-day format would remain popular, other spectators preferred to have their entertainment packaged into bite-sized segments. This included riders who would attempt to ride as far as they could on a track (velodrome) over an hour's time which became known as the Hour Record (currently 34.231 miles or 55.089 km if you are a weenie). 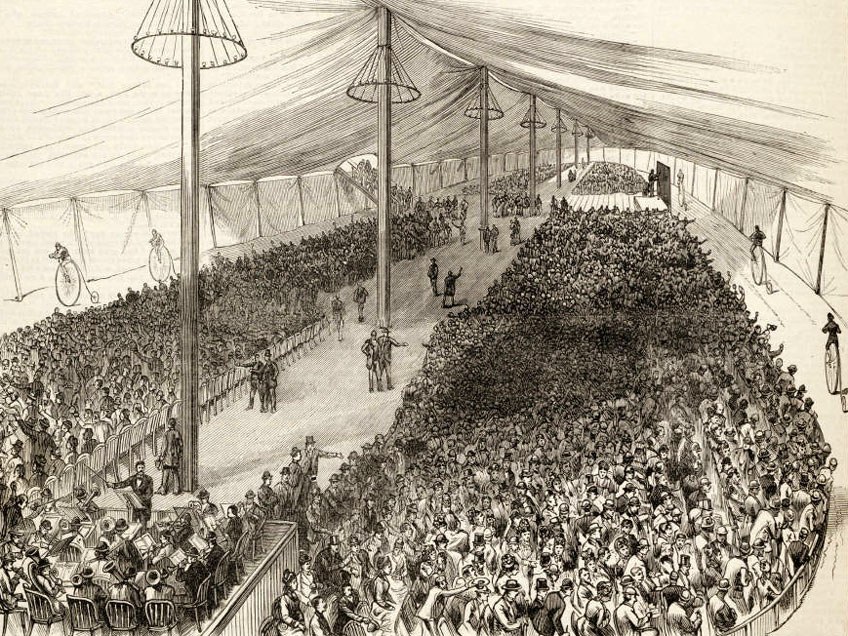 The early hour records were established on a distinctive, Victorian era bicycle that has come to be known as the high wheel, Penny-farthing or (my preferred term) The Ordinary. The advantage of the ordinary was speed (the larger the wheel the faster the rider could propel himself with one pedal stroke) and comfort (larger wheel could overcome the unpaved, muddy ruts that defined "roads"). The disadvantage of the machine was that it was a "dandy horse" for the rich, difficult to mount, and dangerous to ride. For the average person during the bicycle boom it was quickly made obsolete by the safety bicycle and its pneumatic tires, bicycle chain drive, gears and equal-sized wheels. The only place that the ordinary persisted for a time was on the velodrome where it continued to be a faster machine than the safety for some time. 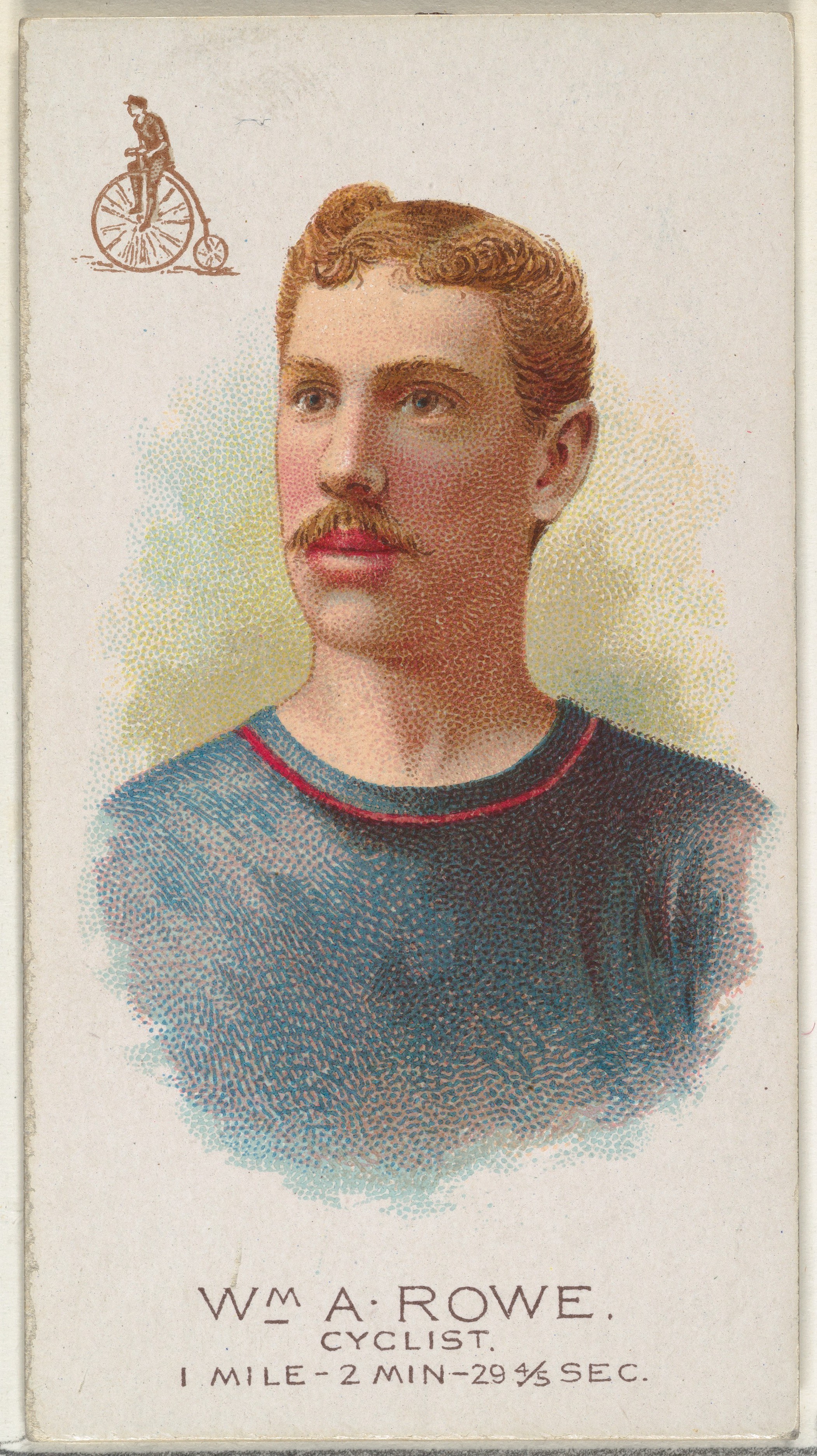 William A. Rowe of Lynn, Massachusetts, American Champion and celebrity.

A trans-Atlantic bicycle-racing rivalry erupted in the 1880s with upstart Americans challenging European champions. It was accepted that Americans were second-raters aided in their record attempts by corrupt referees and clocks that moved slower than European clocks. No self-propelled human being had yet achieved 22 MPH. It was a barrier like the four-minute mile in running, the one minute mile in bicycling, or the speed of sound barrier of other eras. Imagine the shock when American William A. Rowe rode his ordinary bicycle 22 miles, 150 yards on October 25, 1886 at Springfield, MA on a specially-built Columbia Racer smashing his own 1885 record. Feargal McKay has written a comprehensive history of Rowe's effort at Podium Cafe. The important thing to know is that for a bunch of reasons (including the improvement of the safety bicycle, the advent of the motorcycle-car-rocket ship, etc.) no one is known to have attempted the hour on a high wheel bicycle and his record would stand for 133 years. Rowe's was a paced effort meaning he accomplished it with aid of teammates - including high wheel champion George M. Hendee (father of Indian Motorcycles). Spectators preferred paced races because they were obsessed with speed and mayhem. When the carnage got so bad that people were routinely dying in Murderdomes our collective tastes changed to individual efforts. This brings us to our present day.

On October 15, 2019 former professional cyclist Chris Opie and a select duo of pacers attempted and broke Bill Rowe's Penny Hour record at the historic Herne Hill Velodrome in London, UK setting a mark of 22 miles, 369 yards (or 35.743 if you are a weenie). THIS. SHALL. NOT. STAND. 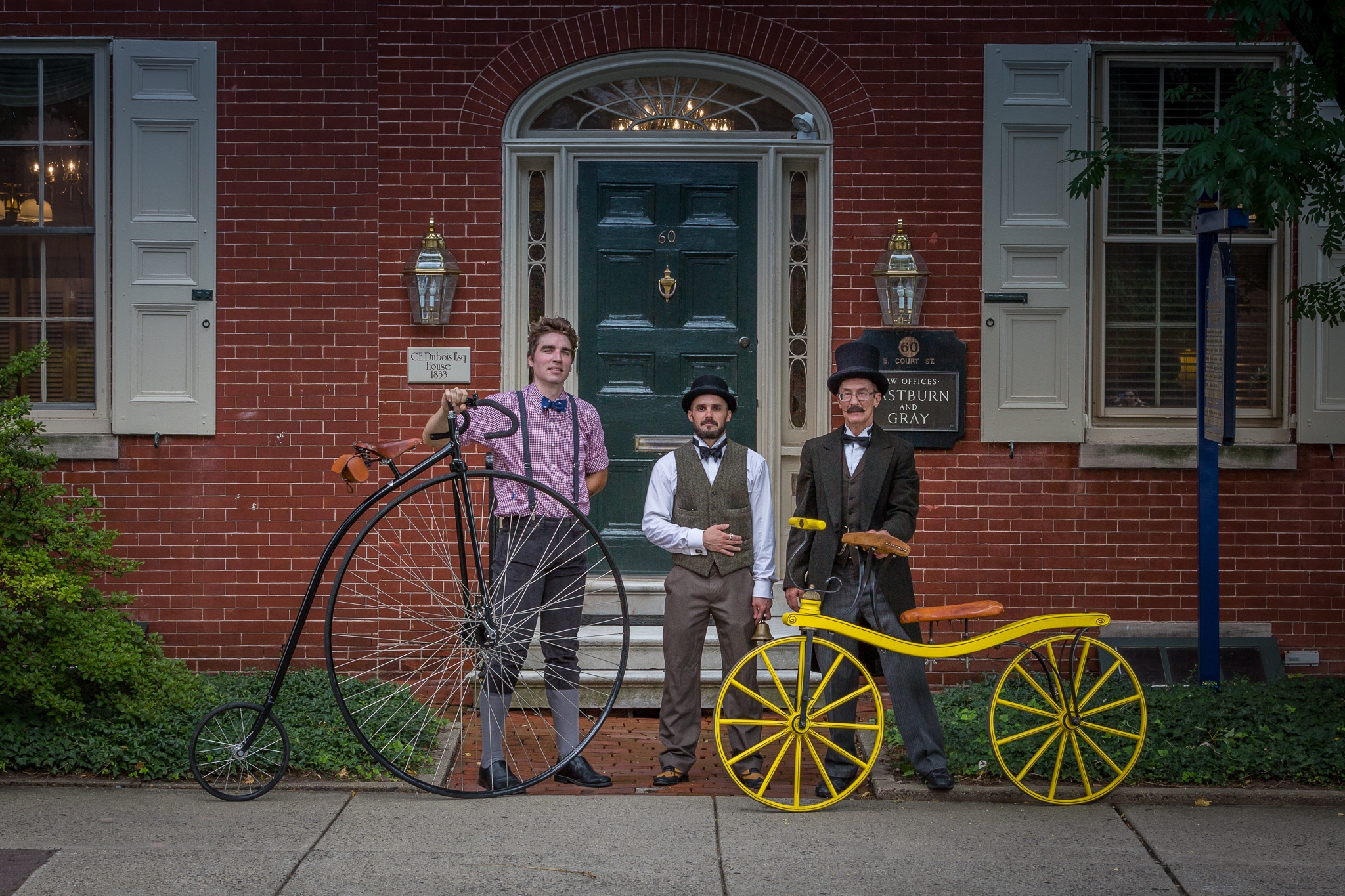 At Doylestown Bike Works we are obsessed with the best transportation machine ever invented and we embrace our community's role in America's industrial and bicycle history. In 2015 our master mechanic/wheel builder Dan Turner raced in the only modern Ordinary race beginning our practical experience. In 2019 we found a kindred spirit in Gui Nelessen a former national champion and currently the captain of the Doylestown Bike Works p/b Fred Beans Cycling Team. Gui proposed taking on the Penny Hour at the Valley Preferred Cycling Center in Trexlertown, PA in June, 2021. We figured we could all quit drinking beer and start exercising, or build world-class vintage bicycles for which most expertise had been lost to time. The choice was easy. 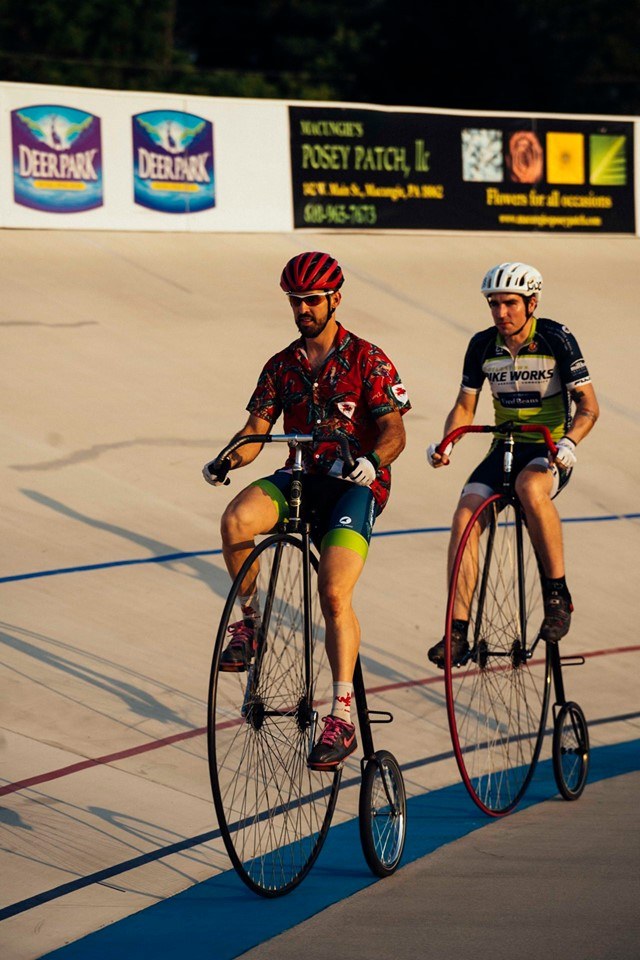 Last year Gui Nelessen, Dan Turner and Keith Hyndman participated in a high-wheel scratch race at the Golden Wheel event at America's premiere velodrome. Afterward, we got to work on building our custom bikes. Thank you to our friends and neighbors whose knowledge and expertise have guided our enterprise: David and Sue Gray of The Wheelmen, Pelle Olaf Kippel of Standard High Wheels, DBW partner Kirk Palermo of VacuBraze Precision Heat Treating, our intrepid welder Moses Heberlein, and the hand-built rim experts at Velocity USA. Thank you as well to Ryan Canney at Riverbank Creative and Paul Boger at MindYourDesign for capturing our efforts. Finally, thank you to Joan Hanscom and her crew at the Valley Preferred Cycling Center for not only humoring our goal, but providing the venue and officials to attempt the record. Our plan is to make our record attempt in June, 2021 and we hope you all can make it! 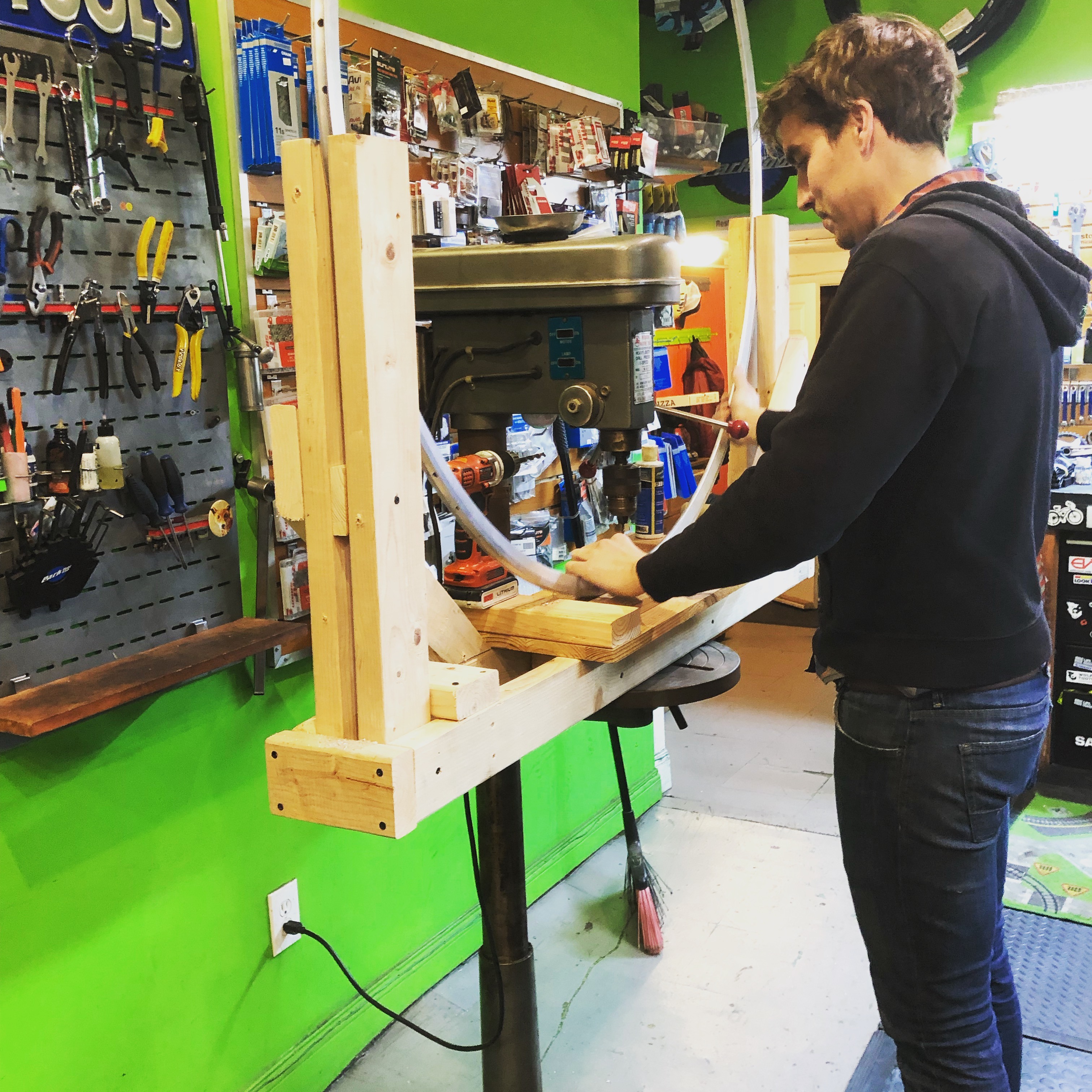 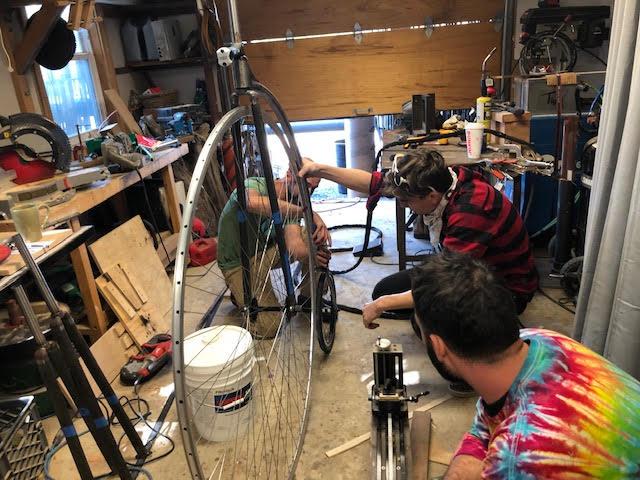 Gui, Dan and Moses getting their welding on

Talk of the T-Town Podcast with Joan Hanscom, Brian Boger and Gui Nelessen