Winning Weekend on the Track, Road, and Hill! 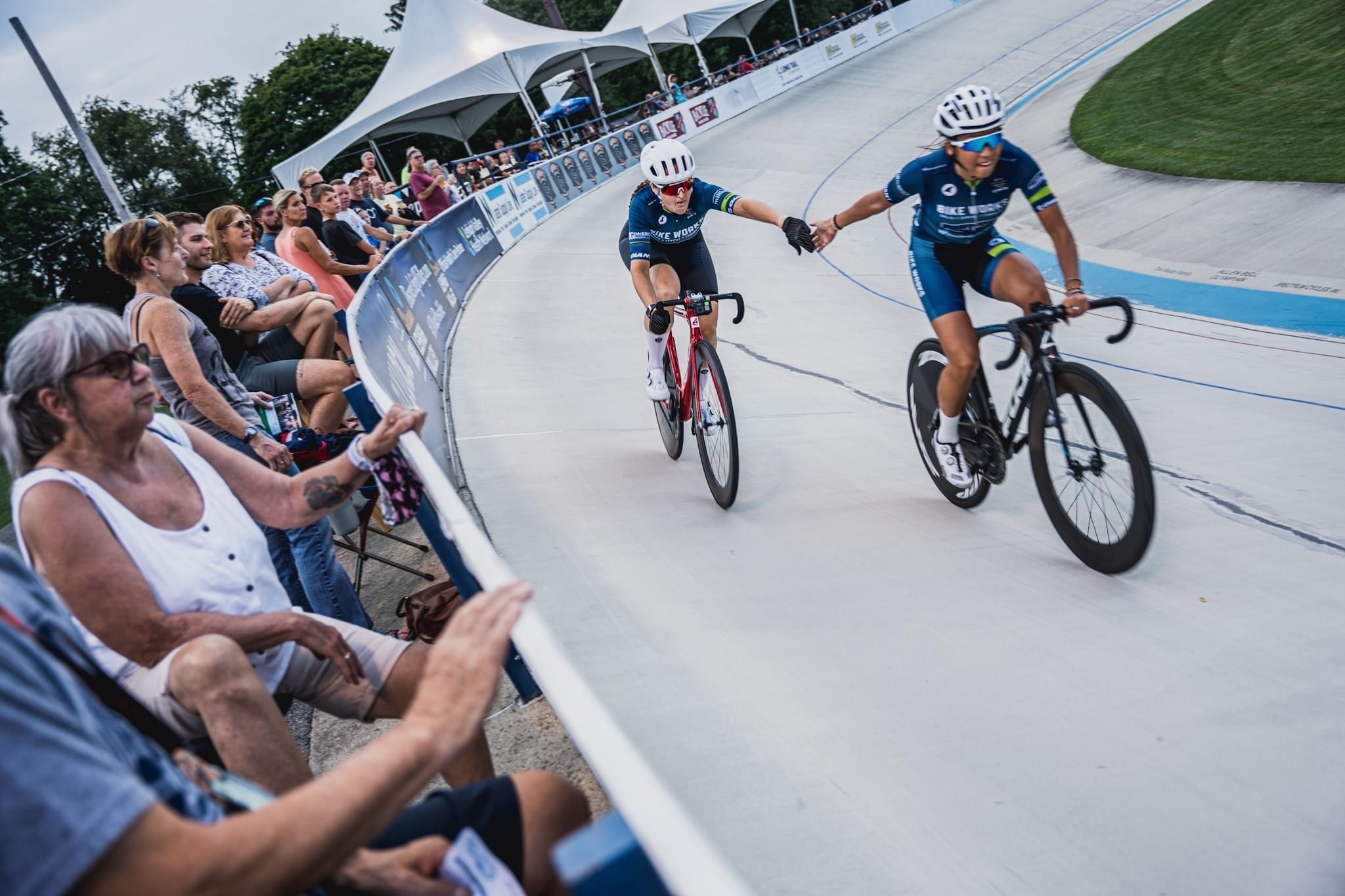 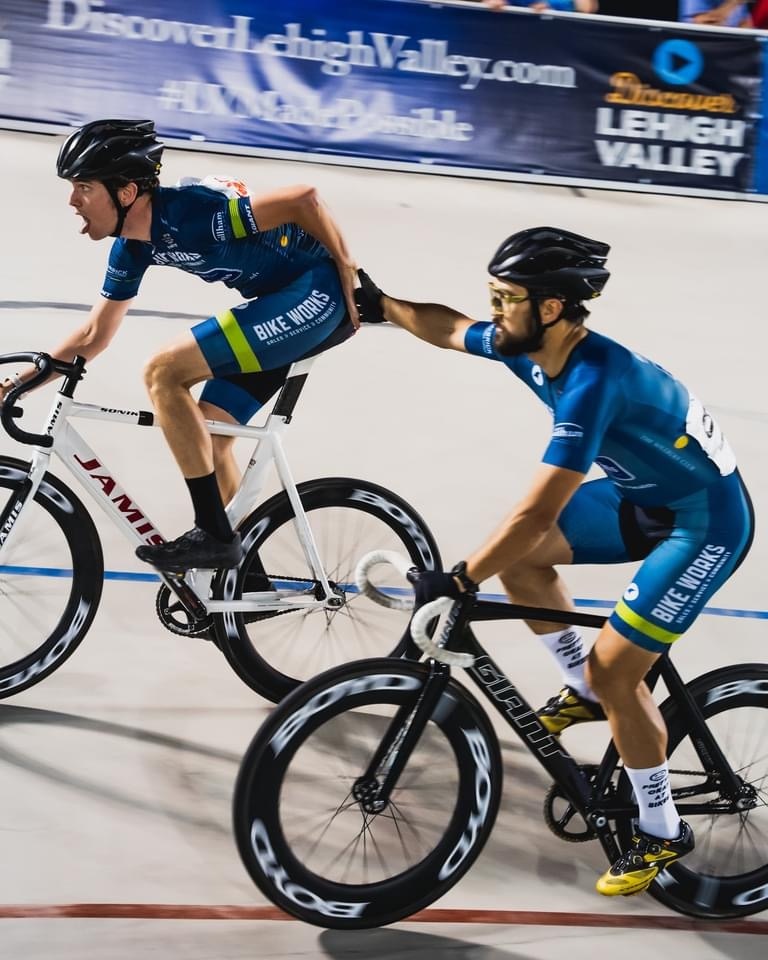 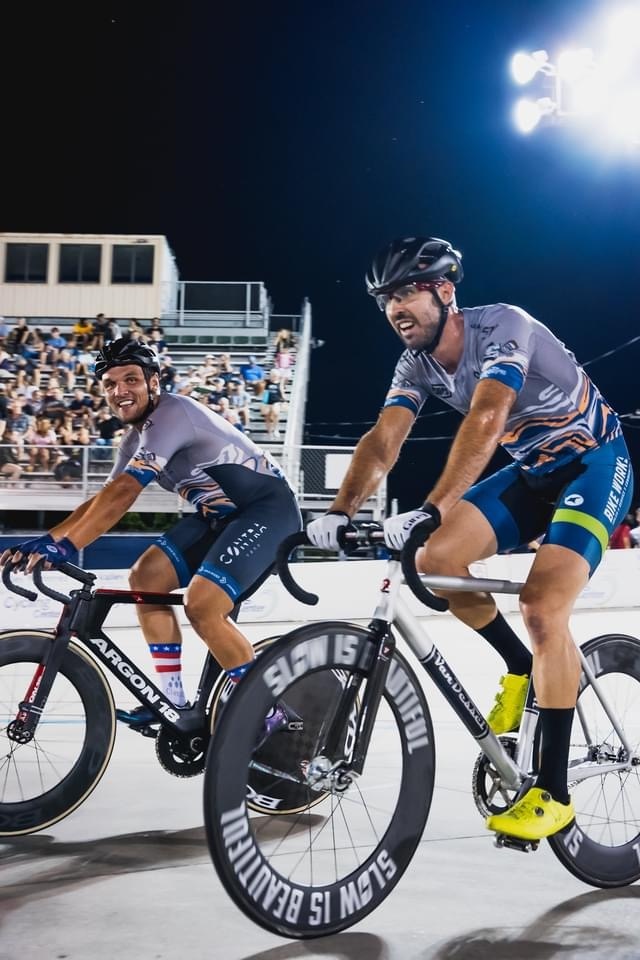 Bicycle racing was once the dominant sport in jazz era America as the sporting public was captivated by two-person teams, racing on indoor velodromes like Madison Square Garden for six consecutive days of carnage. Today's two-person bicycle track race is known as the Madison as a homage to that time. One racer whizzes along the inside of the track, while their teammate hovers over top ready to swoop in and be catapulted forward by their teammate with a hand exchange. Traditionally, the last Friday night of seasonal racing at the Valley Preferred Cycling Center features the Madison Cup, and this year we were represented by three teams: Jessica Chong (Lehigh Valley) with guest teammate and Rider of the Year, Kim Zubris in the women's competition, Gui Nelessen (Lambertville) with guest teammate John Croom, and Chris Meacham (Doylestown) and Andy Dudle (Emmaus) in the men's competition. Though a pretty vicious thunderstorm ended racing prematurely, the team of Chong/Zubris and Nelessen/Croom were on their way to a second place and first place result respectively, and Meacham/Dudle were definitely in the mix. The traditional season-ending fireworks display did a little to ease our disappointment. We'll have one more crack at track success in the Madison when Gui Nelessen and guest teammate and Olympian Bobby Lea, take on the Masters Track National Championship in mid-September at T-Town. 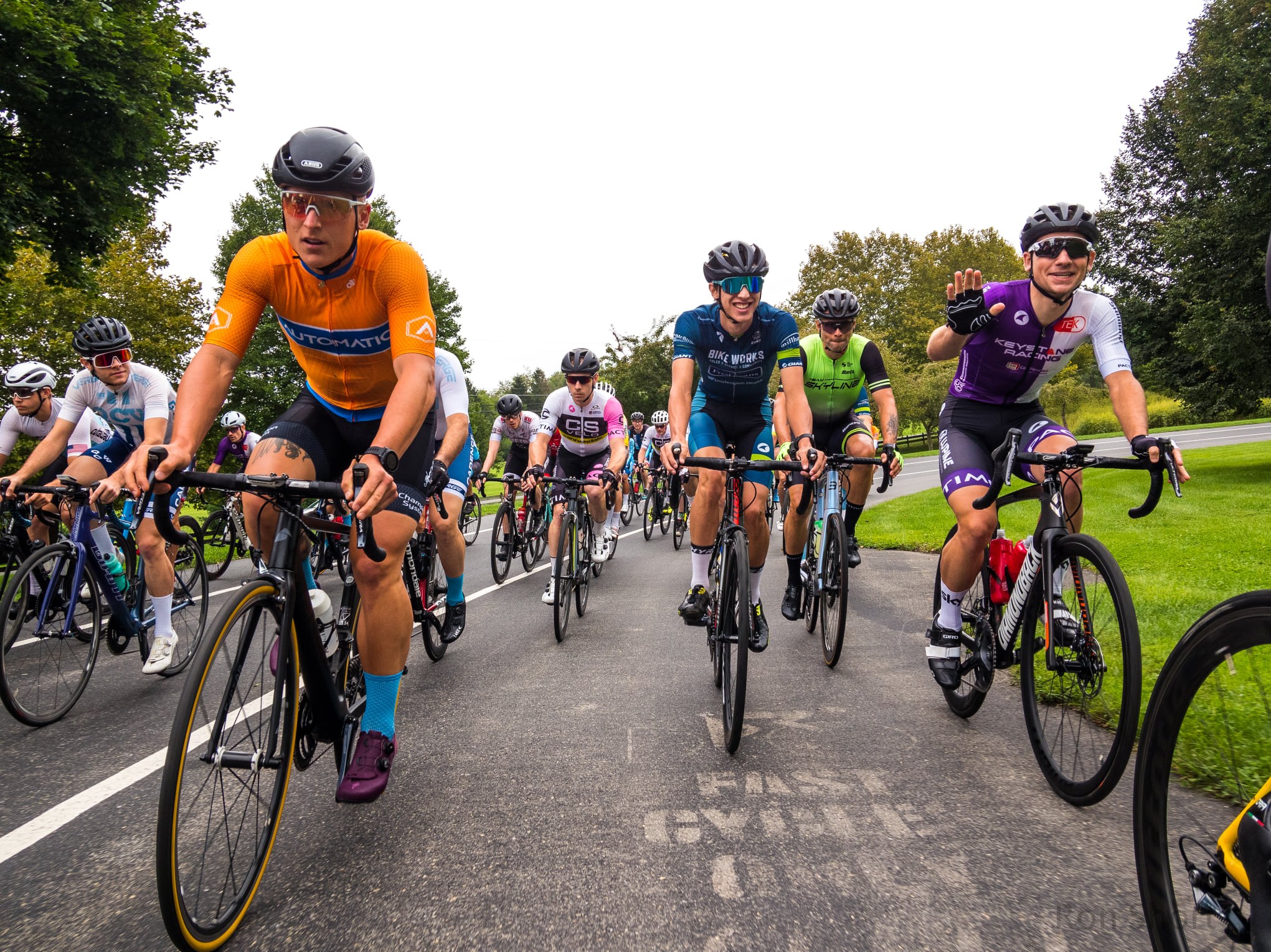 Just across the street from the T-Town Velodrome, the Piscatello Law Criterium occurred on Sunday August 29, 2021 at the Rodale Fitness Park. Connor Thompson (Sinking Springs), Marc Kubushefski (Emmaus), Colin Fitzgerald (Orefield), Jason Wood (Lansdale) and Andy Dudle (Emmaus) represented us in the Pro 1-2-3 race but it was junior racer Alden Weinhold's (Doylestown) day finishing 17th overall in a crash marred race. Joey Kubushefski (Emmaus) finished 6th in the Men's Category 4 race in which he was joined by father-son duo Dave and Steve Szabo (Doylestown), and Rob Beighley (Buckingham). Best wishes to Andy Dudle who escaped serious injury in the aforementioned crash. Meanwhile up in Gotham City, Jessica Chong (Lehigh Valley) took 3rd in the Women's Pro 1-2-3 race at the CRCA Dave Jordan Central Park Classic at a rousing 6:15 AM. That means Chonger was coming off a very short night of sleep after racing in T-Town the night before. Little known historical fact. Did you know that the Century Road Club Association (CRCA) is America's oldest existing cycling club having been founded in 1898? 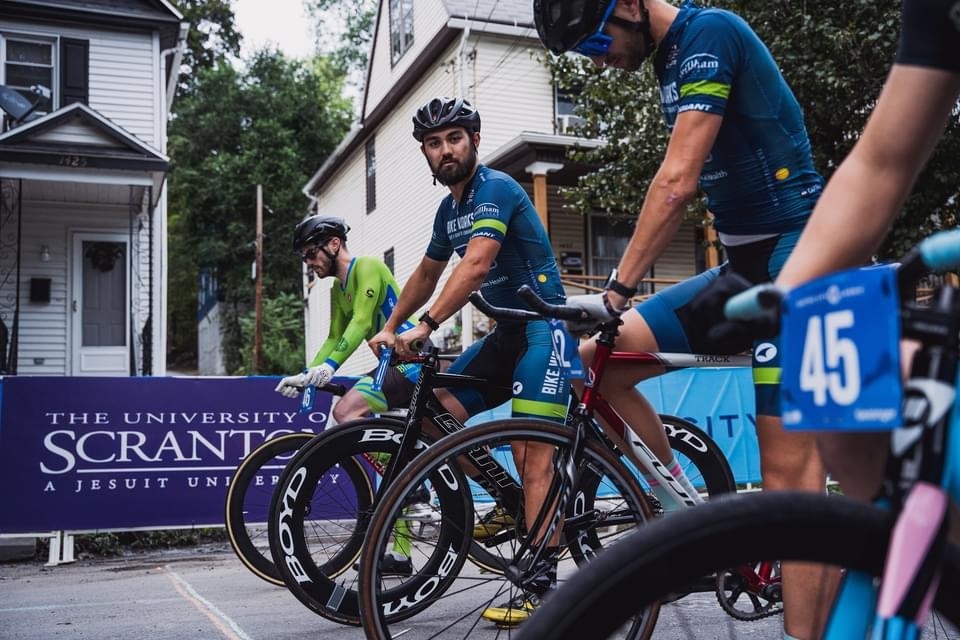 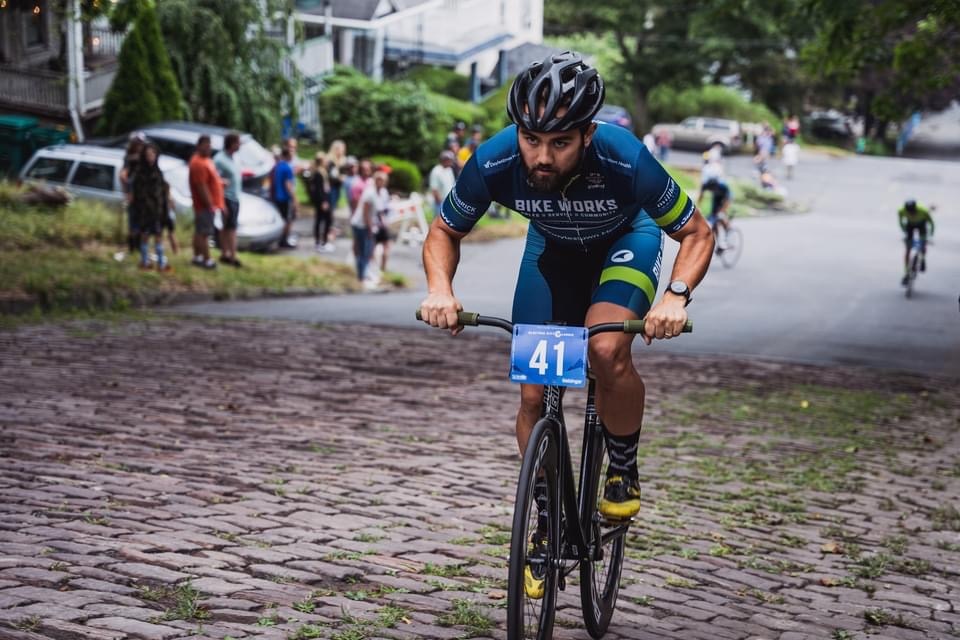 The Electric City Classic in Scranton, Pennsylvania has been a relatively new race event on the annual calendar but was much curtailed in 2021 as race organizers around the country tried to figure out what the COVID-impacted season would hold. This year's event was largely confined to a variety of races up the cobblestone climb of Olive Street in the city's aptly named Hillside neighborhood. Olive Street ranges from 27% to 15% in gradient and the racers had to summit three times in an effort to win overall placement. Not just bicycle races, but also running and even a wheelbarrow race! Andrew Dudle (Emmaus) and Colin Fitzgerald (Orefield) took first and third respectively in the open fixed gear bicycle tournament (bicycles with no free hub so can't coast but must always be pedaled) and Jessica Chong (Lehigh Valley) took first in the open women's tournament. 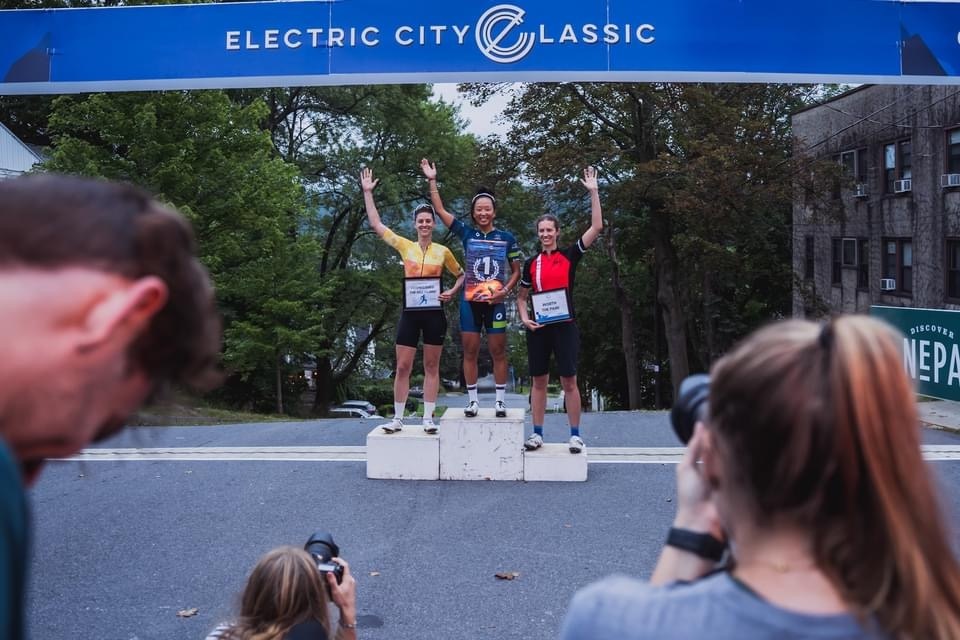 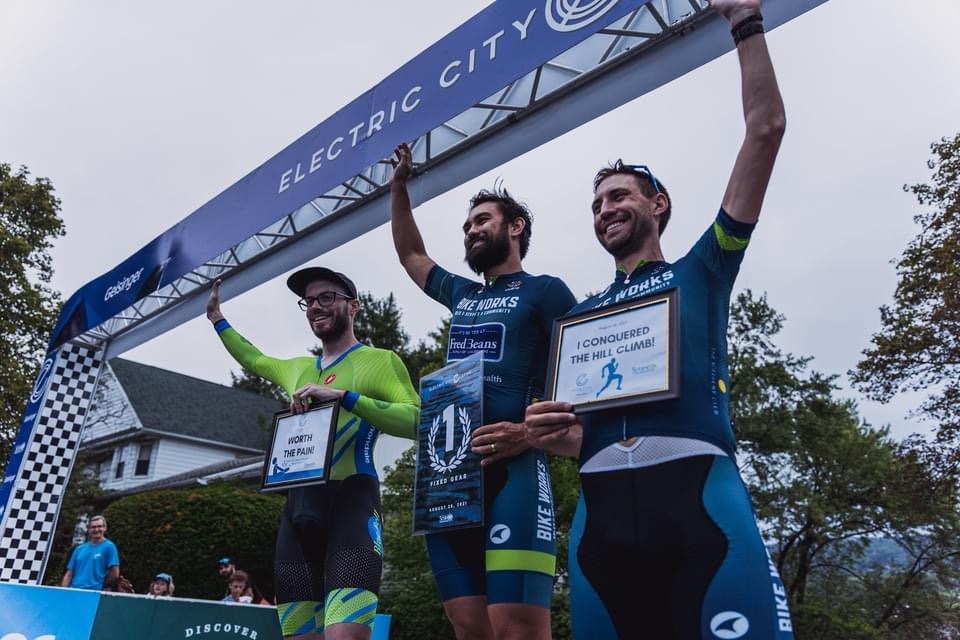 Meet Our Team For the Bucks County Classic

Winning Weekend on the Track, Road, and Hill!